Asics EVORIDE are the lightest and fastest shoes in Asics’ innovative Ride series. I’ve tested these new shoes, which practically roll along on their own... Read the review and learn more about the difference between Asics GLIDERIDE and Asics EVORIDE.

Asics EVORIDE is a sister shoe to the popular Asics GLIDERIDE, which I recently reviewed and was very excited about! If you didn’t see the review, you can read it here:

TEST: Asics GLIDERIDE – THE BEST AND MOST EXCITING SHOES SEEN FROM ASICS IN YEARS 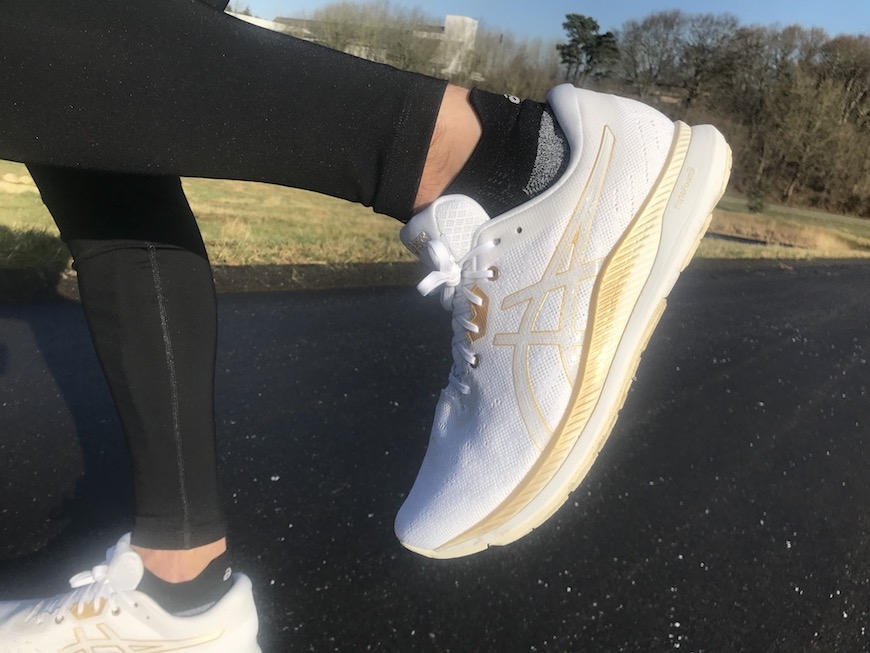 Common for both running shoes in the new Asics’ RIDE series is that they come with a stiff and very curved forefoot, which allegedly contributes to a more efficient run. The radical design gives you a strong “rolling” foot impact before toe-off, which means that the muscles in the lower leg don’t have to work quite as hard. And that saves energy, so you can run for longer/faster with the same effort. Asics calls this GUIDESOLE Technology. 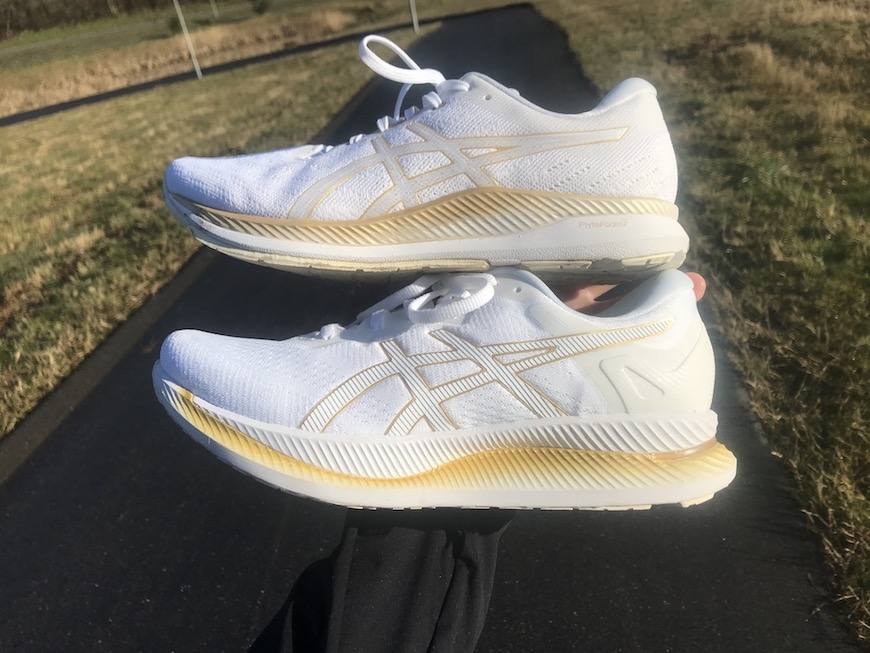 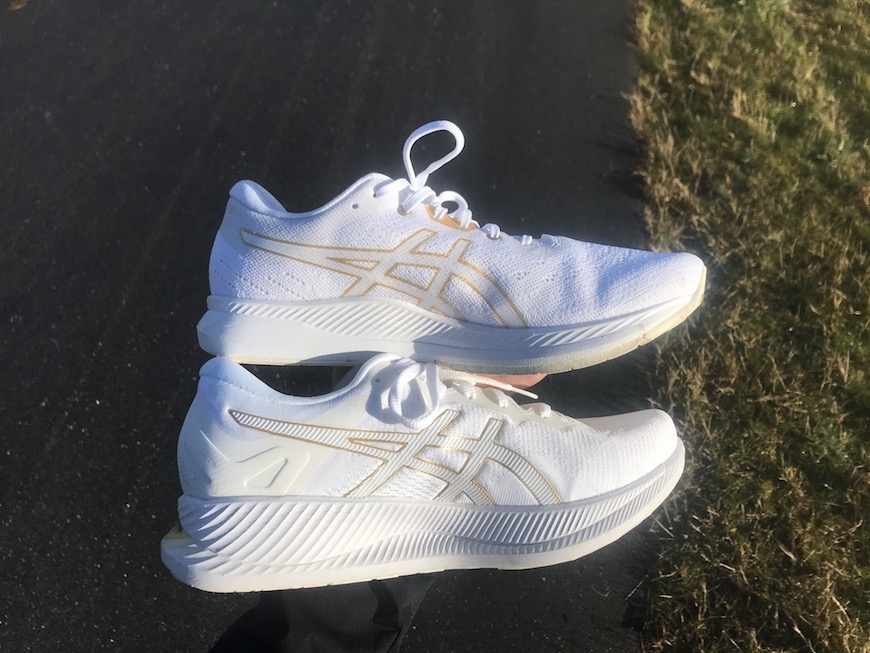 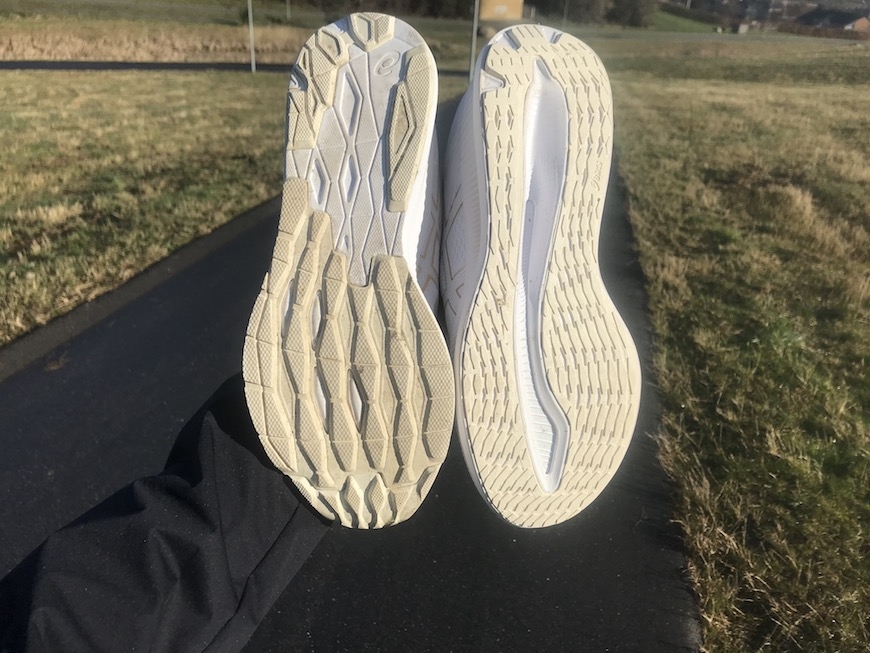 Asics GLIDERIDE is heavier, has more cushioning and a more extreme “roll” over the forefoot. It’s perfect for daily training, long gentle training runs and longer competitions. Type-wise, it’s like the Asics GEL-Nimbus (a neutral and very comfortable daily running shoe), but GLIDERIDE feels significantly faster than Nimbus due to the extreme forward-rolling motion. 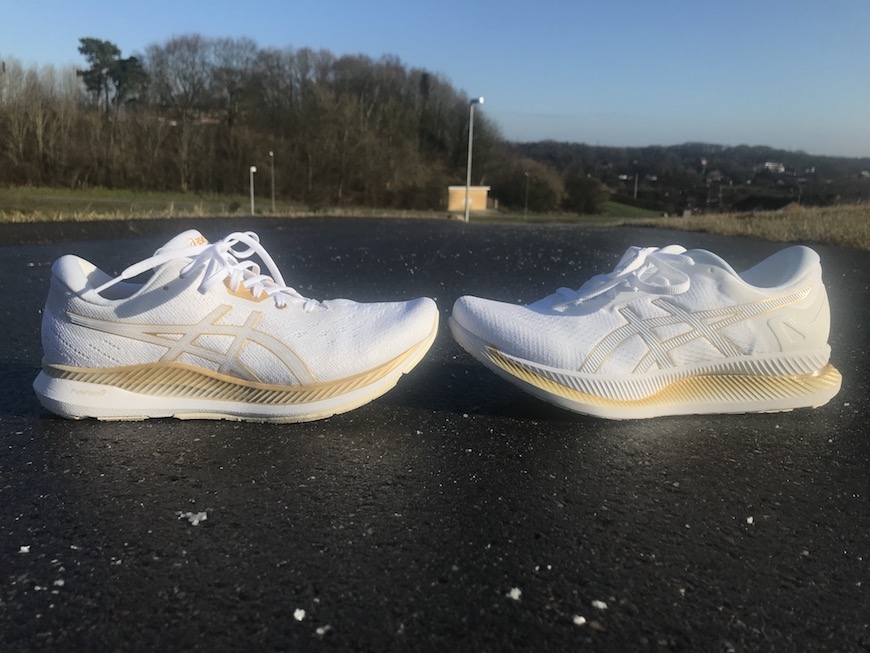 Asics EVORIDE is lighter and faster, and not quite as extreme in its curved structure as GLIDERIDE. It’s a highly versatile running shoe, perfect for those days when you want more speed: Tempo runs, intervals and competitions in all distances. However, it’s sufficiently cushioning and comfortable for most people to use as their daily go-to running shoe, although you get more comfort and protection in the Asics GLIDERIDE.

Type-wise, I would say that the Asics EVORIDE feels like a mix of the Nike Pegasus 36, the Nike Zoom Fly 3 and the Saucony Kinvara 11.

A very powerful combination, if you ask me! 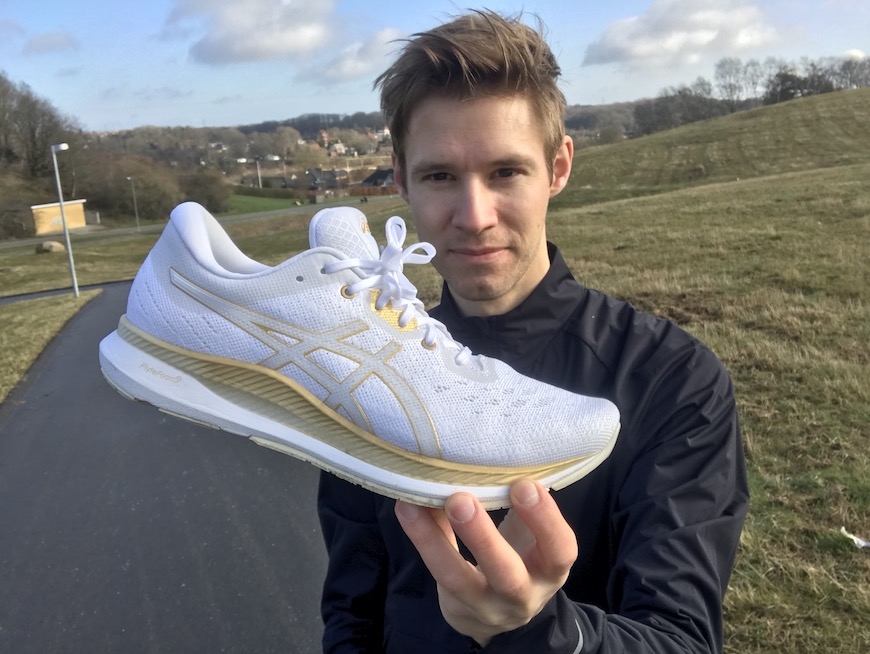 Undoubtedly, it is the midsole with GUIDESOLE Technology that makes Asics EVORIDE stand out from the crowd. 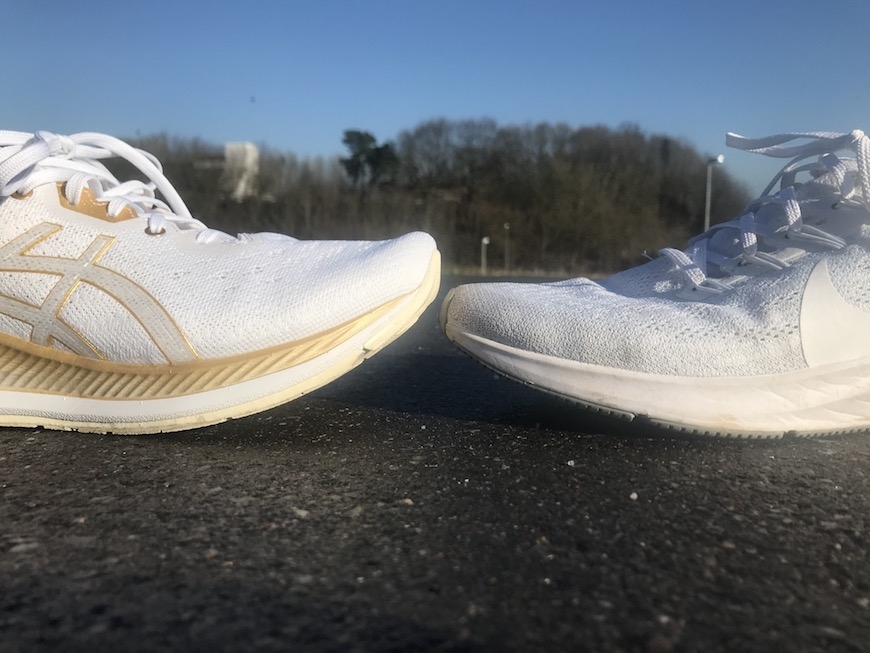 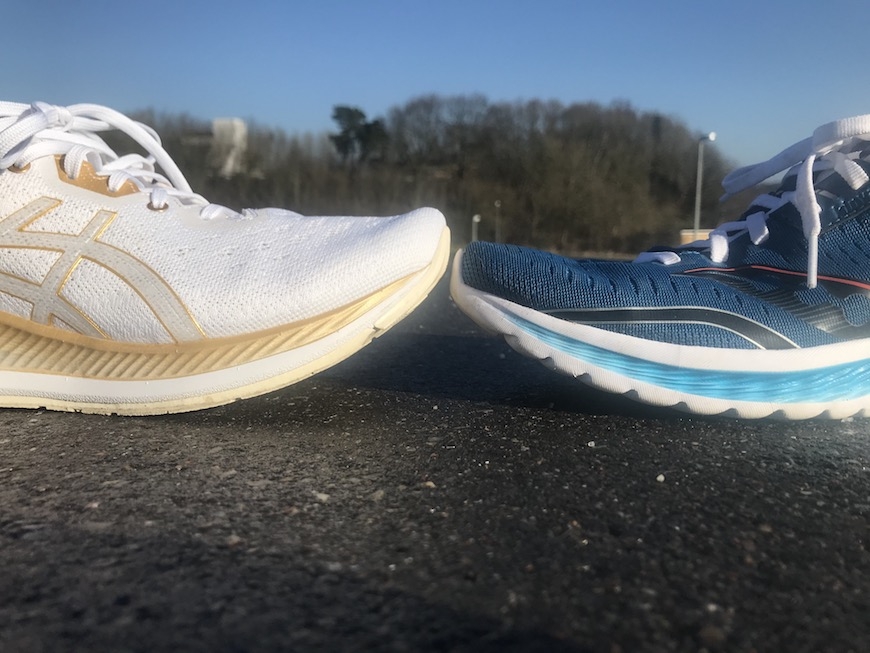 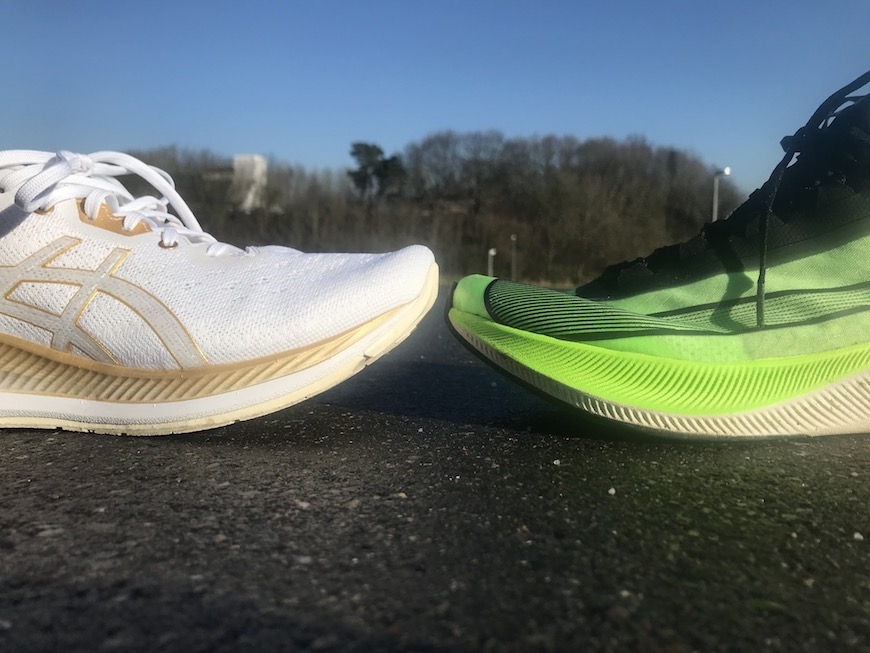 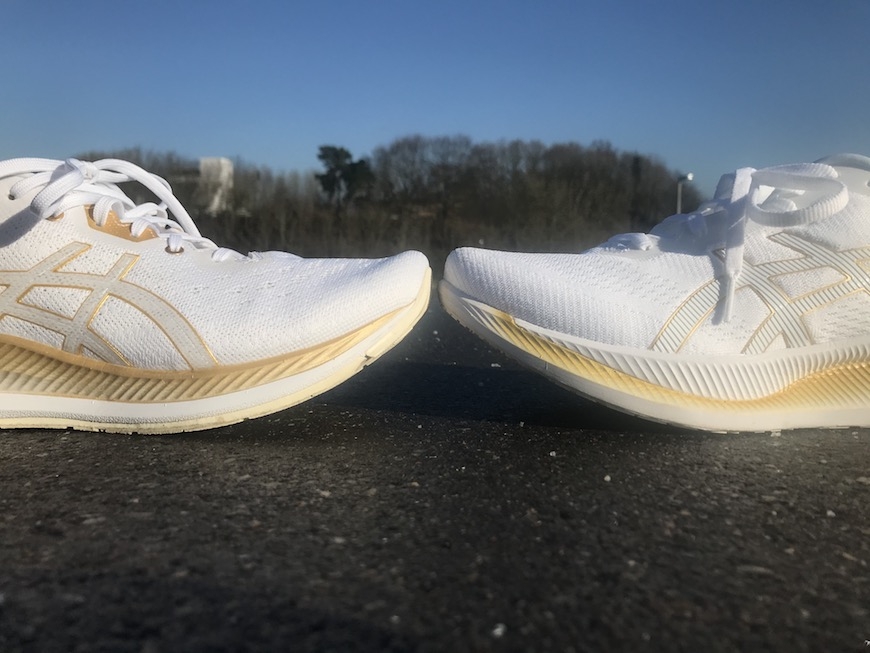 It is the combination of the stiff forefoot and the high “toe spring” that gives the shoe that unique rolling sensation in the toe-off phase.

To get the full effect of the GUIDESOLE technology and experience the “roll” that the shoe offers, you’ll benefit more if you land on the heel and midfoot (which over 90% of us do). The shoe will also work for forefoot runners, they just won’t get quite the same rolling sensation. 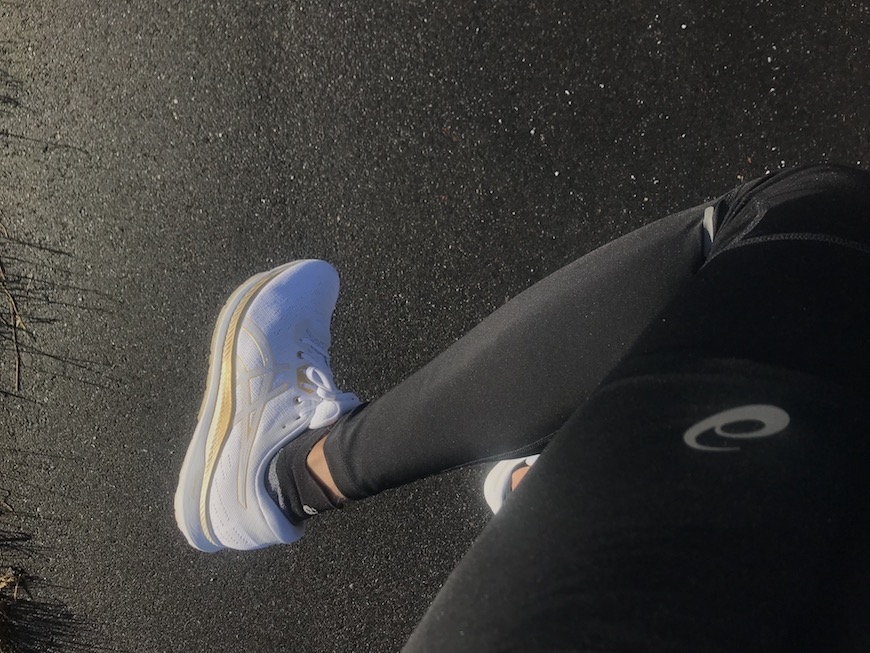 However, in both Asics GLIDERIDE and Asics EVORIDE, I felt the exact opposite. Rather than the “ankle joint bending” in the toe-off phase, what happens is that “the shoe rolls”. This means that the ankle joint doesn’t bend towards its extreme positions, and the muscles in the back of the lower leg also need to do less eccentric muscle work, which means less strain. And I can feel that. I can feel that the shoe feels less of a strain on the calf/Achilles’ tendon. 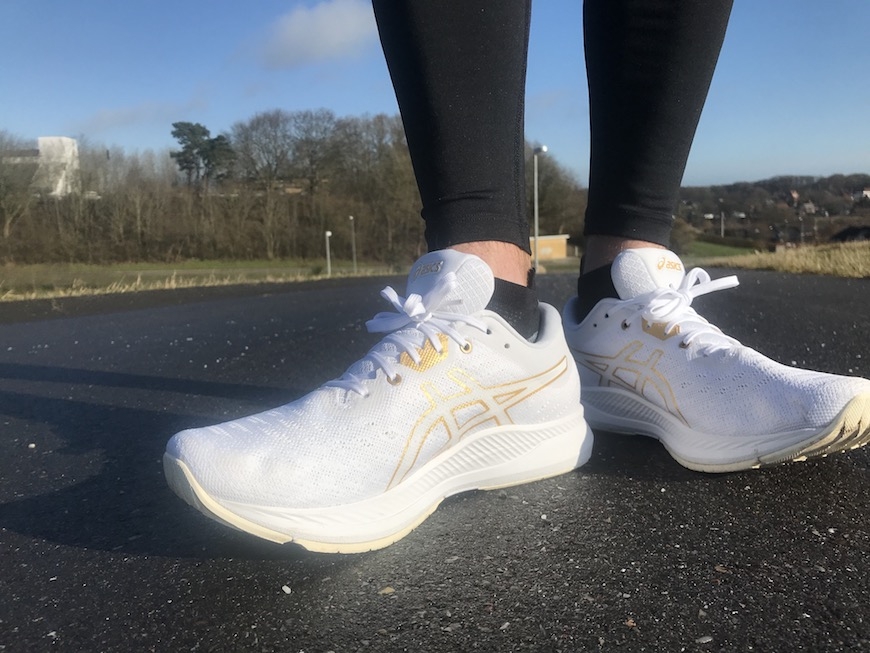 I have completed several long 20K+ runs in both GLIDERIDE and EVORIDE, and my calves and Achilles’ tendon were not the areas where I felt the greatest fatigue/soreness. This is unusual, compared to how I feel when I run long distance in running shoes with a heel drop of less than 6 mm.

The Asics EVORIDE has a good fit, where the first thing I notice is the spacious toe box, which offers plenty of air. Not necessarily in width, where it is very average, but particularly above the toes. 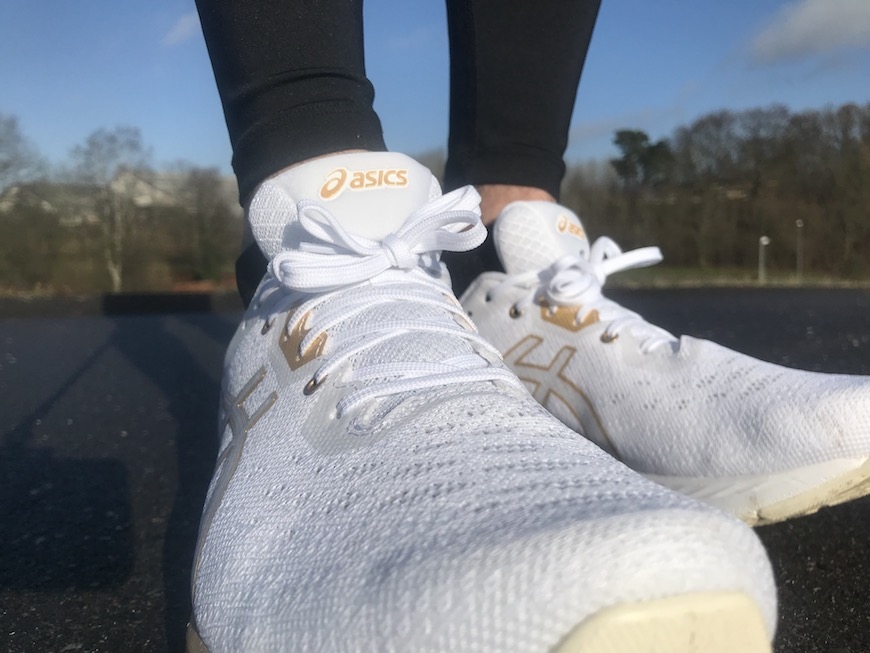 The shoe is also very padded inside. The tongue, located on top of the instep just below the laces, is thick and soft, and so is the lining around the heel. Overall, it just sits really well on the foot. 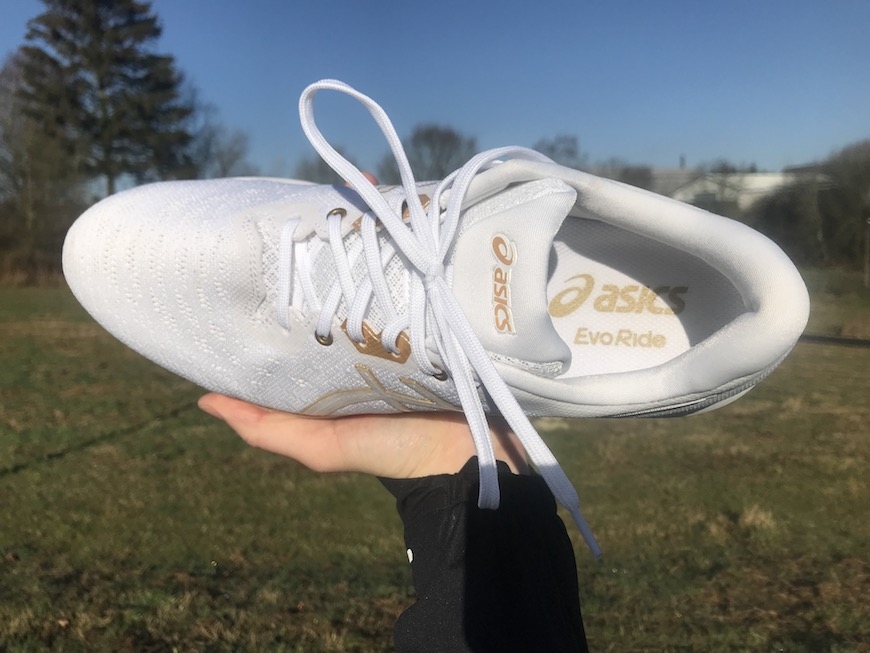 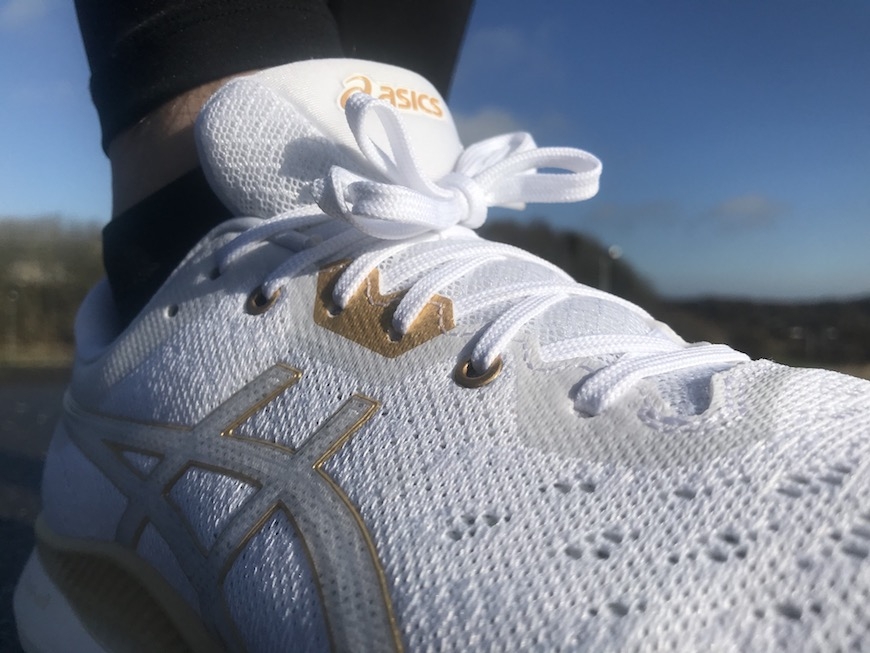 The outsole is coated with an extra durable rubber on virtually the entire sole. This shows that Asics considers EVORIDE a daily training shoe rather than an outright speed shoe, where the focus is on saving weight wherever possible. The Saucony Kinvara 11 is a good example of this. The Asics EVORIDE is built to withstand daily training and therefore lots of miles. 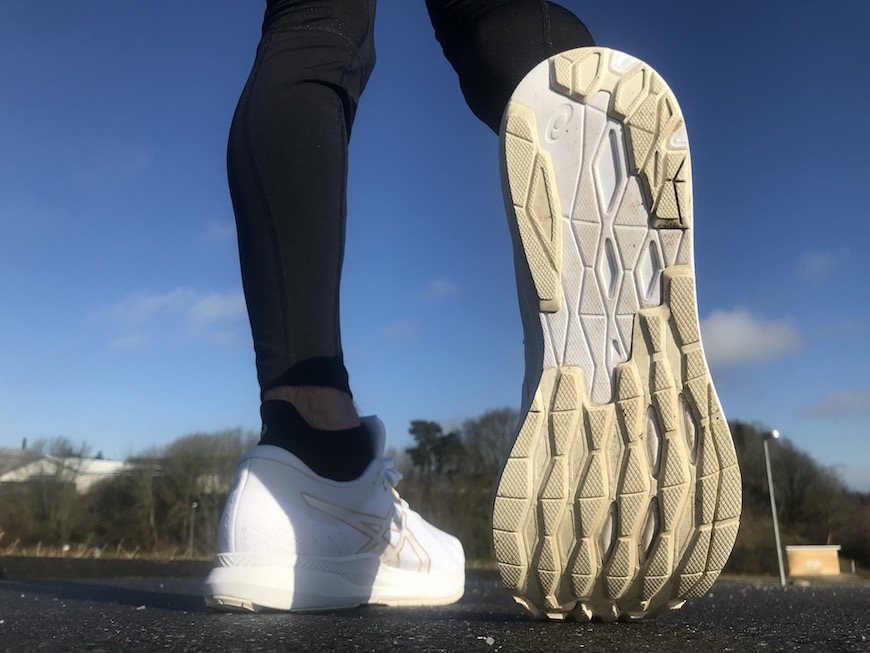 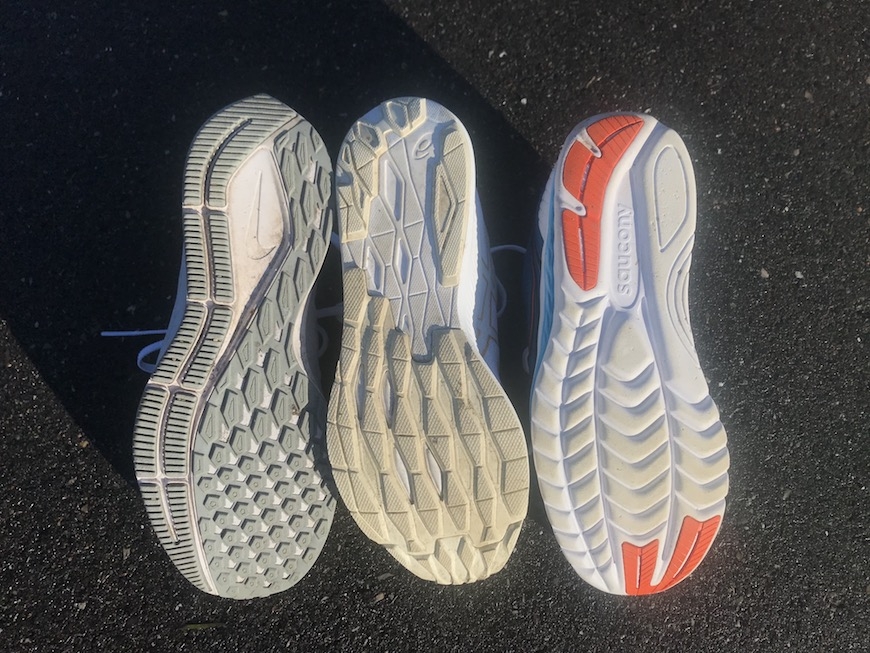 Overall opinion of the Asics EVORIDE

If you saw my review of the Asics GLIDERIDE, you will know that I’m a huge fan. And after testing the Asics EVORIDE, I’m at least as excited about this one too! The curved GUIDESOLE offers a unique rolling sensation, which is just amazing. While the roll is not quite as extreme as in the GLIDERIDE, it’s still enough to ensure that the shoe keeps “encouraging me” to run faster. With the Asics EVORIDE, I experience a lightness in my running that is rarely seen.

I consider Asics EVORIDE a “lightweight trainer” that can be used on virtually any run. So, if you’re looking for a fast, versatile running shoe with a low drop that works for both daily training and tempo runs, then Asics EVORIDE is an excellent option for your next running shoe! 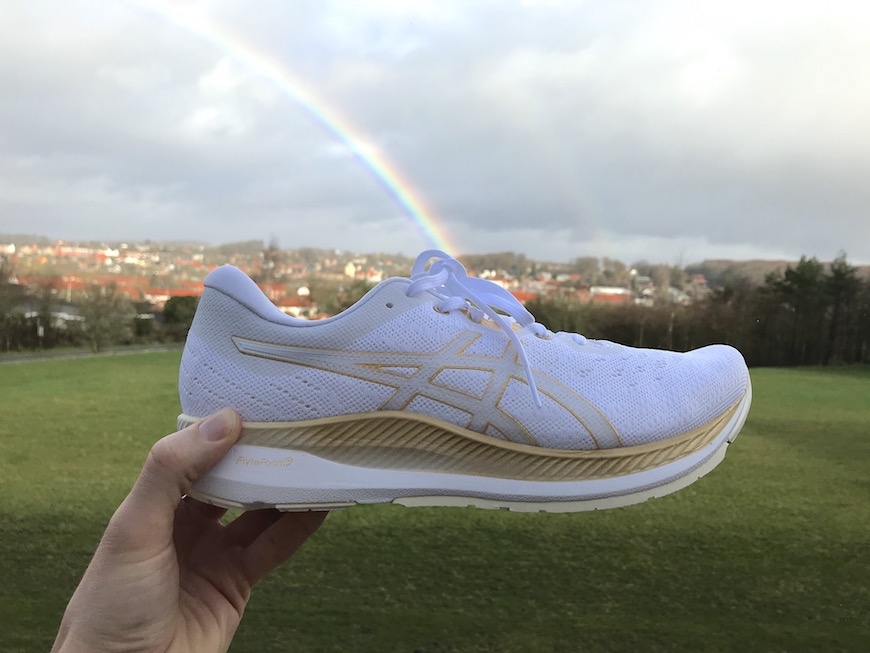 "There's gold at the end of the rainbow."