Here, you can read everything worth knowing about the new Fenix 6 top models by Garmin. Read about the changes from the Garmin Fenix 5 Plus, for example, and get to know all the differences!

The watches in Garmin’s Fenix collection are generally regarded as being the best all-round multisport and outdoor watches on the market. The new Garmin Fenix 6 certainly live up to this, as they are full of advanced functions and made of premium materials. Generally speaking, they are watches that can do everything and that can easily tolerate being used!

Garmin Fenix 6 – an overview of the different models

Garmin fenix 6S is the smallest and is 42 mm in its diameter.

Garmin fenix 6 is of a medium size and is 47 mm in its diameter.

Garmin fenix 6X is the largest and is 51 mm in its diameter.

In addition to the three different sizes, the watches also come in different models. What is written after the 6S/6/6X in the name of the watch represents the model.

Here are the five models:

Silver – The Silver model is the light edition of the Garmin Fenix 6. Silver has the basic functions, but it does NOT have Garmin Pay, Garmin Music, WiFi, built-in map, or the most advanced training functions.

Pro – The Pro model is the standard edition of the Garmin Fenix 6. It has all the advanced functions, and it is equipped with the same type of glass that you find in most the Garmin watches – what is called the Corning Gorilla Glass.

Pro Solar – The Pro Solar model has the same functions and the Pro and Sapphire models. But the Pro Solar is the only model equipped with Solar Power Glass, which can extend its battery life by the use of solar energy.

Here is the complete list of watches in the Garmin Fenix 6 collection that Garmin expects to release. Notice that not all models will be available from day one.

In this section, we will go through what is new with the watches in the watches of the Garmin Fenix 6 collection.

In the table below, you can see the differences between the Fenix 6S, the Fenix 6, and the Fenix 6X. All functions or properties that are marked as NEW are new relative to the watches in the Garmin Fenix 5 Plus collection. 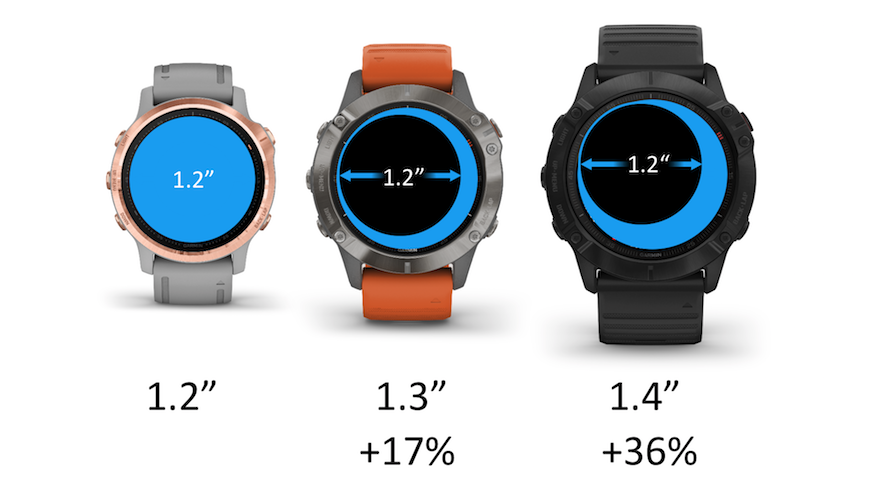 The screens on the watches in the Garmin Fenix 6 collection are always on. They are optimized for outdoor use, so that you can easily read them under all lighting conditions.

All the watches in the Garmin Fenix 6 collection now have a markedly improved battery life both in the smartwatch mode, GPS mode, and GPS+Music mode.

The GPS mode is, for example, doubled from the Fenix 5/5S Plus to the Fenix 6/6S. Garmin Fenix 6 also has a completely new Power Manager that tells you how much battery life is left, among other things – and this is noticeably in HOURS rather than PERCENTAGE. Power Manager also makes it super easy to change from different Power Modes, so that you can control its battery use and save power when you do not need all the functions of the watch.

This ONLY applies to the Garmin Fenix 6X PRO SOLAR.

Thanks to the revolutionizing new screen technology called Power Glass, Garmin Fenix 6X Pro Solar can now harvest the energy of the sun and in that way extend its battery life. In battery saver mode, the Solar function can potentially extend the battery life with more than 50%. A clever solar indicator and widget will, whenever you need it, tell you how much solar energy your watch is gathering. 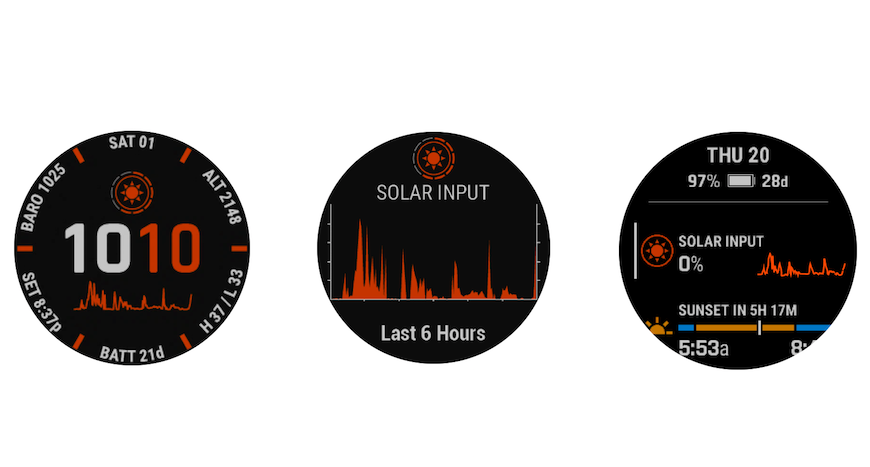 The lug-to-lug distance (that is, the distance between the two spots where your strap is fixed to the case of the watch) is reduced on both the Garmin Fenix 6S and the Garmin Fenix 6, so that they now appear slimmer and more elegant. 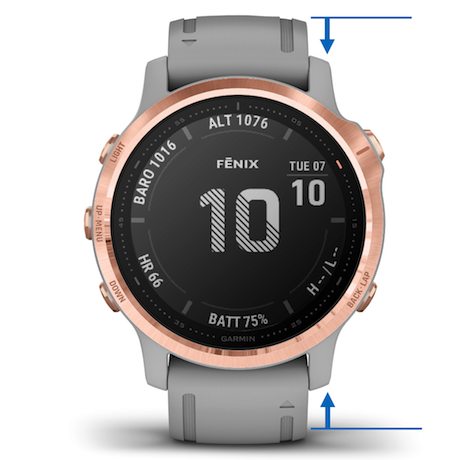 The watches in the Garmin Fenix 6 collection are ultradurable and have been tested in regard to military standards (MIL-STD-810G). Garmin believe that the watches can be certified at the highest standard when it comes to Height (Low Pressure), Rain, Humidity, Drop and Freeze/Thaw. (At this time, the test has yet to be finished).

Garmin Fenix 6 is waterproof down to 100 meters.

The user-interface on all of the watches in the Garmin Fenix 6 collection has been updated, so that it appears more structured and refined. If you have used a Garmin watch before from the midclass or higher, then you will quickly be comfortable with the menu structure – there is not that big a difference. The greatest difference is found under Widgets, where you will now get information from different widgets at the same time. On the Garmin Fenix 5 Plus, each widget had its own page. It is now also possible to show more and more nuanced information under activities and navigation.

To enhance the user experience during activities, Garmin has changed the way Fenix 6 presents data. It is now possible to have up to 8 data fields at the same time, just as it is possible to combine the use of gauges and normal data fields on the same page.

You will find examples of new data pages below.

Garmin Fenix 6 has double the memory capacity than the Garmin Fenix 5 Plus. This means that there it has space for more maps and more music.

Garmin Fenix 6 comes with a pre-installed topographical Europe map with a real turn-by-turn navigation that we know from a driver’s navigation.

To help you find the best routes (no matter if you are running or biking), Garmin Fenix 6 will pick out the popular routes and roads that other Garmin users use.

The maps have different looks during different activities (running, bicycling, skiing, walking, etc.), so that you by a single glance will get the information that you need the most for the kind of activity you are doing.

As a new feature, Garmin Fenix 6 comes equipped with a piste map from more than 2000 ski areas. The maps are so easy to read that, with even a quick glance, you will see the names of the lifts, the pistes, and their difficulties.

One of the new training functions in the Garmin Fenix 6 is called PacePro. PacePro is a new and intelligent function that helps you keep your optimal pace for the full route. It will be a great idea to use this for half marathons or full marathons, for example.

On a run, it typically goes up and down, so that it can be hard to keep the same pace throughout the distance. Some kilometers will be faster (downhill) and some kilometers will be slower (uphill). PacePro calculates the altitude profile of the route and tells you exactly how fast you should be running each section of the route to reach your goal.

This is how it works in practice:

1. You pick a predetermined route. (Can be chosen/created on your watch, smartphone, or computer).

2. You tell it the desired pace that you wish to complete it with.

3. The Garmin Fenix 6 then calculates the altitude profile of the route and tells you the pace for each segment of the route.

4. The watch also provides you with pace guidance in real-time, so that you know how fast you should be running of the different parts of the route.

It is also possible to chance the pace strategy, so that the watch guides you to run with a Negative Split, that is, that the second part should be run faster than the first part.

The watch also keeps an eye on how quickly your body adapts to new surroundings. This function is especially useful for runners, bicyclers, and triathletes who often travel for the sake of competitions. The watch can tell you when you are acclimated and ready to do your best. 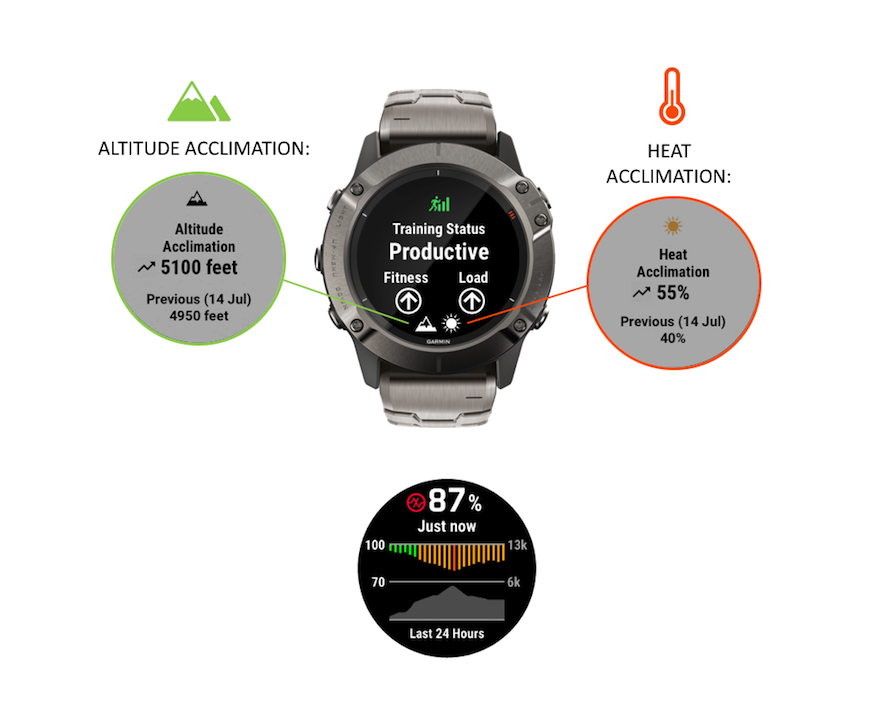 Garmin Fenix 6 is equipped with the newest wrist-based heart rate monitor. The monitor can register your heart rate during activities and everything else, 24/7.

As a new feature, this wrist-based monitor also works under water – so now you can use it for swimming as well!

All watches in the Garmin Fenix 6 collection also have the so-called PulseOx sensor, which can measure the oxygen level in your blood. This function is especially important for mountain hikers and everyone else who is up high. What it can indicate is how well your body adapts to the lower oxygen level when you are up high, which helps indicate how fast you can climb upwards.

Garmin Fenix 6 also comes with recommended recovery times, which can help you avoid straining your body too much.

The watch can also give you the advanced Running Dynamics and Cycling Dynamics measurements that we know from the Garmin Fenix 5 Plus. But this requires some extra equipment like the HRM-Run/HRM-Tri Heart Rate Strap, FootPod, or Garmin Vector pedals.

Garmin Fenix 6 has a built-in music function, which makes it possible to play music or podcasts directly from your watch and without needing your smartphone in the vicinity. The watch comes with the Spotify app pre-installed, so all you need to do is to download your offline playlists and songs directly on your watch from your smartphone or computer (requires a SPOTIFY PREMIUM subscription).

You can also transfer your mp3 files or music from the streaming service Deezer.

You need to have a pair of wireless Bluetooth headphones to play music from your Garmin Fenix 6.

In this section, we go through the additional functions of the watch. These are functions you will also find in the Garmin Fenix 5 Plus.

Garmin Fenix 6 has Garmin Pay, which is a clever function that allows you to pay directly with your watch on all contactless machines. You just add you card on the Garmin Connect app on your smartphone, and you are ready. Garmin Pay only works with certain banks and credit cards. View the list her: Garmin Pay - Banks & Cards

Garmin Fenix 6 is equipped with a barometric altitude meter and a 3-axis compass, which is automatically calibrated, so that you are always sure that you have the most accurate information about your current position and direction.

Garmin Fenix 6 has a built-in safety function that will send messages to your next of kin, if you are in an accident.

In the Garmin Connect app you can register 1 to 3 contacts, who will get a message or mail in the case of an accident.

The way the function works is to register any powerful force (as when you fall) followed by a period of no movement. It will then send a message to your contacts, telling them that an accident has happened. There will be a live-track GPS-link with your exact location in the message, so they can see exactly where you are – even if you have been picked up by an ambulance.

You can also send the message manually, if you suddenly feel unwell. This is done by simply holding down the upper left button for 5 seconds until the watch has vibrated 3 times.

NB: The function only works if you have your smartphone nearby and it is paired with your watch.

Garmin Fenix 6 has tons of dedicated training, sports, and activity apps pre-installed. These apps make it easy to track your activities, follow your progression, and optimize your performance. The Garmin Fenix 6 has a new Off-Piste/Backcountry Skiing app. Otherwise, it has the same activity profiles as the Garmin Fenix 5 Plus. Some of the are: Running, Trail, MTB, Bicycling, Triathlon, Fitness, Strength, Sailing, Golf, Swimming, Skiing, Snowboard, Cross-Country Skiing, Rowing, Outdoor, Hiking, Climbing, Tactical, and lots more.

Garmin Fenix 6 tracks all of your most vital data and provides you with meaningful insight into your actual activity state. The Fenix 6 measures your stress level, steps, heart rate, calories, and sleep quality, among other things.

You can also receive smart notifications from your smartphone on your Garmin Fenix 6, so that you can see calls, messages, mails, notifications from social media, the weather, traffic alarms, calendar reminders, and much, much more.