Review: Hoka One One Carbon X 2 – When you want (real) speed!

If you have tried the Hoka One One Carbon X (or Carbon X-SPE), you will find that the new edition, Carbon X 2, has seen a number of updates. Hoka One One has redesigned the position of the carbon plate in the midsole and shock absorption to provide a softer running experience without compromising on the performance of the shoe. Get ready for an incredibly soft, stable and responsive shoe for training and racing. We´re about to present a top class running shoe!

If you have tried the original Hoka One One Carbon X or Carbon X-SPE, you will also know that both shoes have a reputation as "Love or Hate" shoes. You either love them or store them far away in your closet.  And to be honest I wasn´t the biggest fan of Hoka One One Carbon X-SPE before testing them. Indeed I was very sceptical but also very excited to try out Carbon X 2 as the rumours about them were very positive. 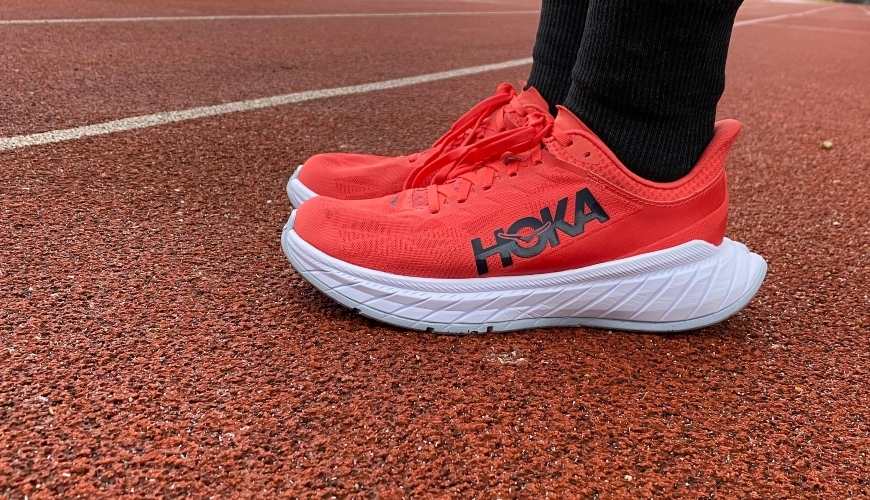 I will get to the new split in the heel (I am sure you have noticed it) later. I would first like to highlight the improved upper in Hoka One One Carbon X 2 which has a slightly tighter fit (which I personally prefer) than the previous models. Carbon X-SPE did not sit completely tight around my foot which meant that I had the feeling that I was dragging it slightly after me. This isn´t the case with Carbon X 2. The shoe has a tight but very comfortable fit.

Another improvement in the upper is the new heel cap. Incredibly comfortable. The heel cap is taller and the heel pad itself is much softer than in Carbon X and Carbon X-SPE. Its no longer necessary to tighten the laces extra to prevent the feeling of the heel slipping. Now it fits just perfectly. 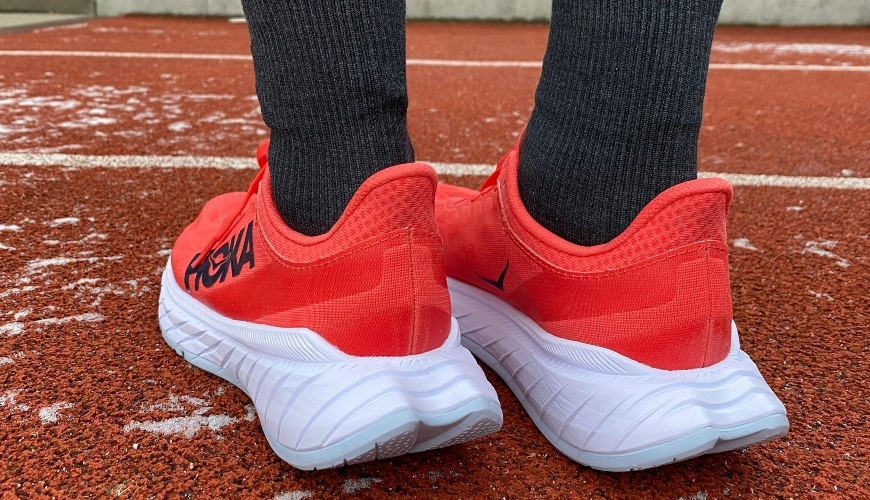 Hoka One One Carbon X 2 – Responsive and softer midsole

Carbon X 2 has also seen a couple of midsole improvements as opposed to Carbon X and Carbon X-SPE which had exactly the same midsole construction. And the improvements all lay the foundation for releasing an absolute top class running shoe. 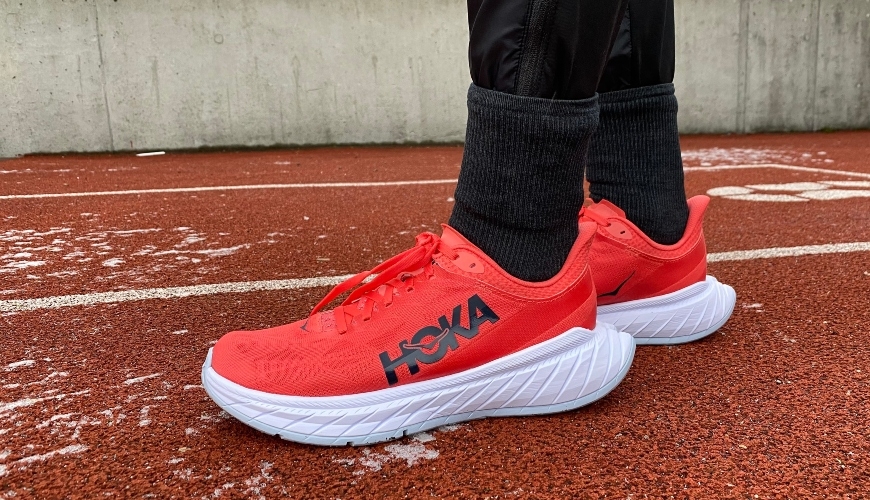 The midsole now features the new midsole-foam which Hoka calls CMEVA-foam. Its the same light material which you will find in Hoka One One Clifton Edge and Hoka One One Rocket X. The amazing thing about this midsole material is that you are able to add more foam to the midsole and still maintain a very low weight. In addition the CMEVA-foam provides a noticably softer running experience with significantly more return energy. 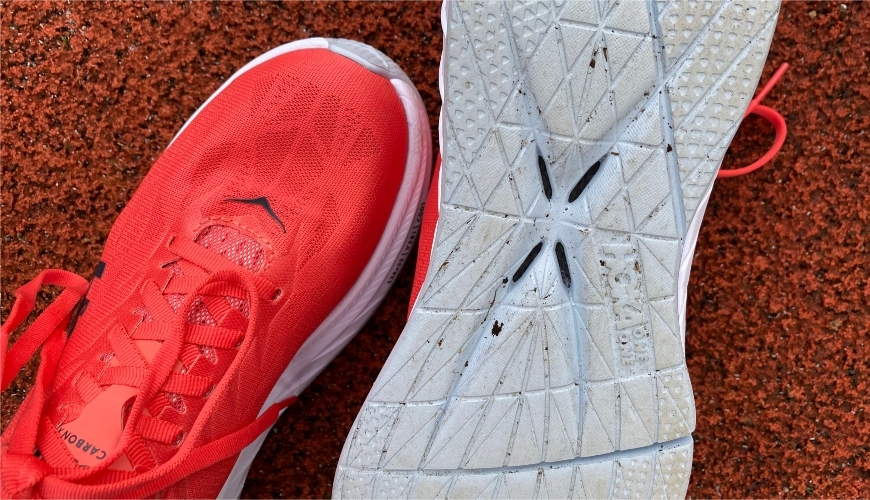 The combination of the soft foam and the stiff carbon plate makes Carbon X 2 soft enough for your daily training and solid enough for fast running. Its a running shoe built for different distances and speeds. You will get a softer landing but still enjoy Hokas well-known Rocker-effect as the carbon plate is stiff and curcy which makes it roll forward effectively as you land. This provides a responsive take-off and push forward. Its a very cool sensation which makes running seem almost effortlessly. 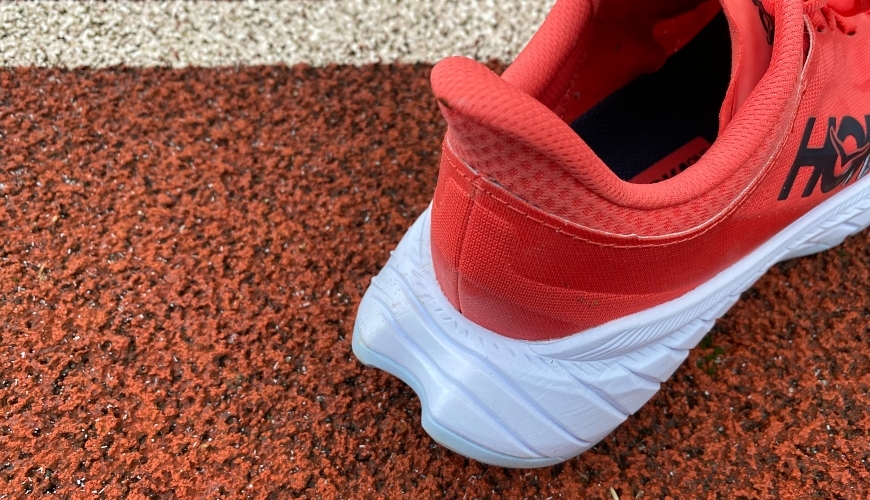 What is the function of the new split heel? Is it just part of the design or does it have a function? Hoka calls it a Swallow Tail-design which should make the heel landing zone softer and provide a more natural transfer of the heel-roll to the forefoot. I didn´t notice the effect but I also have a tendency to land more towards the mid/-/forefoot and initiate my roll from there.

There hasn´t been a lot of changes to the outsole in Hoka One One Carbon X 2 if you compare to Carbon X and Carbon X-SPE. Its still produced in EVA rubber which provides a great grip, even in wet conditions.

It has great durability if you stick to asphalt. Carbon X 2 isn´t made for running off-road or on trail with a rocky surface. This would quickly put a lot of wear and tear on the outsole even after just a couple of runs. So, stick with asphalt and Carbon X 2 will keep you going mile after mile for a long time. 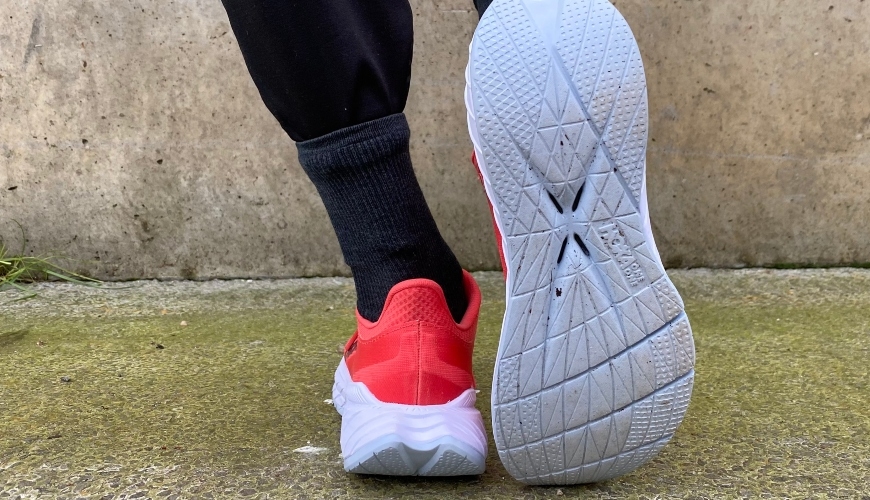 How does Hoka Carbon X 2 feel?

Its rare that I immediately think ”YES!” when I try out a new couple of shoes. You usually have to settle in to a new pair of shoes. But you immediately get a special kick when you sink your feet into Carbon X 2 and feel how the shoe closes in around your foot And this "locked-in" sensation is important when you have tried it out.

Its a shoe that "runs for you". It rolls and runs as much as you push it but always in a very comfortable way. All my runs in Carbon X 2 have felt light and comfortable - in fact it has felt so effortlessly that I have often just felt like going on and on.

I am completely convinced that the more you use it, the more comfortable it will get. I have done runs in the woods between 7-18km but if you want to go further, Carbon X 2 would be an obvious choice thanks to its softness but also its responsiveness.

Its truly a top-class running shoe. It certainly stands out from many other running shoes. Hoka spoils us. I have only tested it for training but when I (hopefully soon) am able to compete again, Carbon X 2 would certainly be a great option.

Hoka One One have within a short amount of time launched two new shoes; Hoka One One Rocket X and now Hoka One One Carbon X 2. But what is the difference between them - and which one should you choose?

In short Rocket X is an obvious choice for short intervals, speedy runs or short races while Carbon X 2 is suited for longer runs in moderate pace as well as half-marathons or marathons. Of course its very individual what you prefer - a light and soft shoe like  Rocket X, or a more comfortable and "forward-rolling" running shoe like Carbon X 2.

I would choose Carbon X 2 for longer runs in moderate pace as the shoe provides great protection and a significatnly more "rolling"-effect than Hoka One One Rocket X. 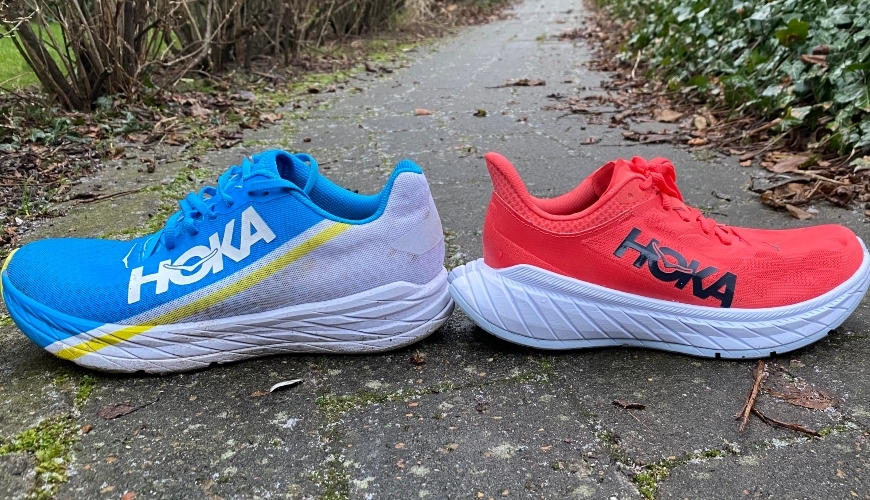 Hoka One One Rocket X feels more like a traditional running shoe which is softer and lighter than Carbon X 2 and therefore would perform best for short distances. You also get a faster landing/take-off, primarily in the forefoot in of Rocket X, which means that when fatigue sets in during long runs, you will need some protection under your foot. If you are an experienced runner, you will certainly be able to go for long runs in Rocket X, fx marathons, but if you are an exercise runner or beginner, Rocket X will not provide enough protection and comfort for longer distances.

If I was going to do a marathon, I would choose Carbon X 2 over Rocket X, as Carbon X 2 is more solid (but still softer than its predecessor Carbon X), has more shock absorption, provides more protection, is more stable and has a more significant "forward-roll".

Carbon X 2 will certainly become one of my favourite long distance/-pacy running shoes. I won´t rule out using them for short intervals/pacy runs, but I have other shoes which also would do well on these distances like New Balance FuelCell TC, Hoka One One Rincon 2 among others.

But as Carbon X 2 is suited for different speeds and distances, it´s a shoe well-suited for everyone who values the combination of comfort and pace highly. 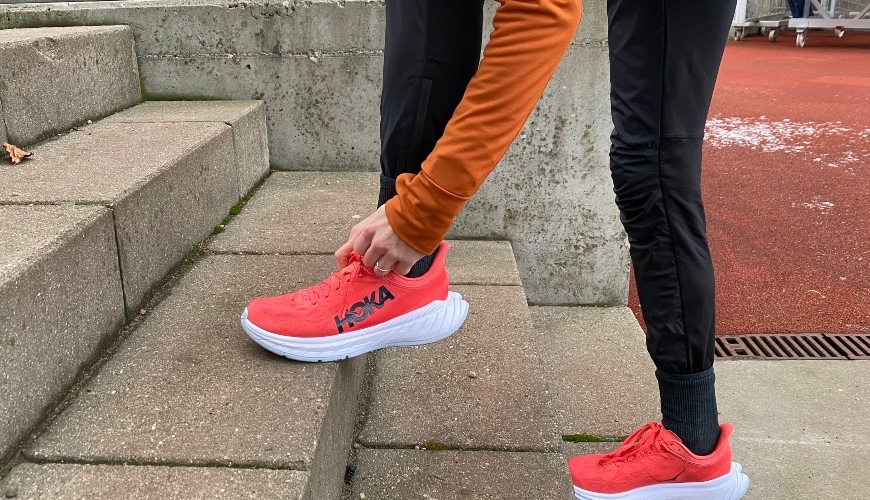 If you are less experienced and want a pair of fast carbon plate running shoes which can help you through tough intervals while providing a high level of stability, protection and comfort, Carbon X 2 is an obvious choice among the carbon-shoes in the market. The wide platform in the shape of the sole provides a stable and "forgiving" landing zone. This makes it better suited for exercise runners who perhaps doesn´t have the most developed running technique.

Carbon X 2 isn´t NEARLY as unstable as other carbon plate running shoes like Nike Vaporfly, Nike AlphaFly, Saucony Endorphin Pro and New Balance FuelCell TC. Here you will feel like you´re on very unsteady ground and if you take a sharp turn in these shoes you should really take care not to twist your ankle. You don´t have to worry about that in Hoka Carbon X 2. Its much more stable and forgiving - which will certainly be a great help.

On the other hand, if you are an experienced half marathon/marathon runner with many long and tough pace - and moderate workouts coming up or you just need a new pair of marathon shoes, Carbon X 2 is certainly also a great option.

I am quite certain that Carbon X 2 would be a great partner for your training. In particular as your new racing shoe. 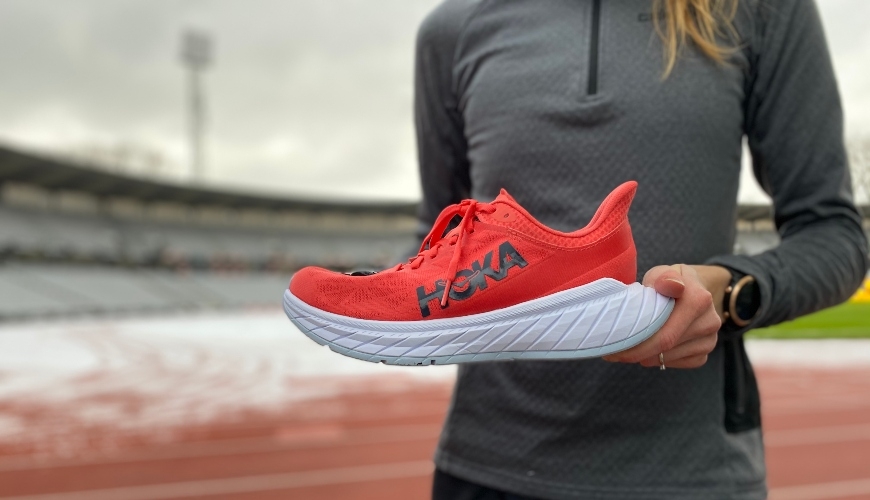 You should choose Hoka One One Carbon X 2 because you get a superb race and pace running shoe, which combines lack of weight, comfort, solidity and optimal support in the midsole. Indeed its a running shoe which does very well in distance-running thanks to its midsole-comfort.

Hoka One One Carbon X 2 is quite simly a terrific running shoe.

Find more features in our universe of inspiration right here: