TEST: Hoka One One Clifton 7 - First-class comfort and shock-absorption

The Hoka One One Clifton is Hoka’s best-selling running shoe. This is mainly due to its incredible versatility and how it manages to perform whether you are running slow, fast, long, or short distances.

Also, this shoe brilliantly encapsulates everything a Hoka One One is.

Clifton is extremely light and has soft and comfortable shock absorption and delivers a smooth foot strike every time you bring it out for a run.

Hoka has just released their brand-new Hoka One One Clifton 7, which is a new and improved version of the predecessor.
Read my complete review below and learn more about this improved model. 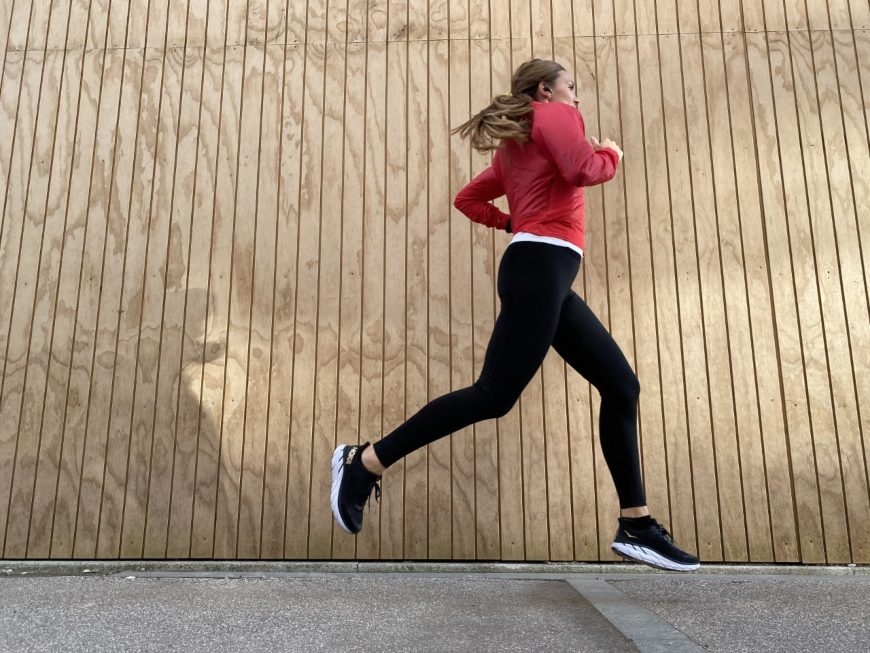 Info on the Hoka One One Clifton 7

Hoka One One Clifton 7 product details

The Hoka One One Clifton is a lightweight and solid running shoe with maximum shock absorption and great comfort.

The Clifton 7 is a neutral everyday trainer with a 5 mm drop and a weight of only 247 grams.

As a result, Clifton is hard to beat in the category of everyday trainers because of its light weight and great comfort.

This is because the Hoka One One Clifton 7 will provide you with a Marshmallow midsole in a soft EVA foam, which ensures maximum shock absorption on any distance.

This new model is almost identical to earlier versions. It has kept both the midsole and outsole of the Clifton 6; however, it now has a new and improved upper to help enhance the breathability and make it even more comfortable to wear. 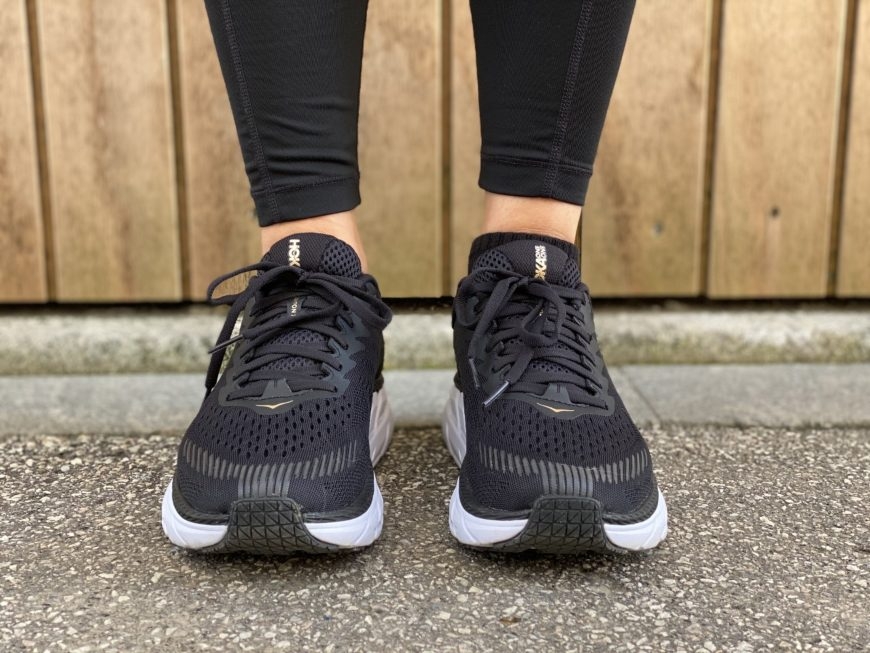 The fit of the Hoka One One Clifton 7

The first time I wore a pair of Hoka One One Clifton 7, I was surprised at the general roominess of the shoe and the great room for the toes at the toe box.

Personally, I have a fairly wide foot, which often results in me getting shoes that are too tight. However, this was not the case here.

On top of this, in this new version, the shoe tongue is now attached to the shoe by the use of some mesh material, which means the Clifton 7 hugs around the foot when I lace up the shoes. This too is a great plus, as it makes it feel more comfortable and safer to run in. 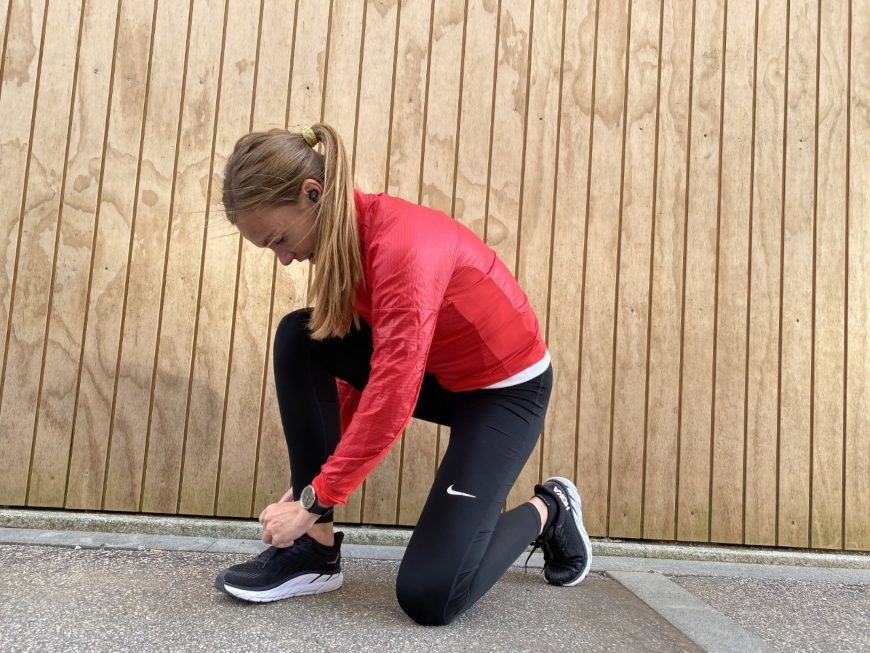 The upper of the Hoka One One Clifton 7

The greatest changes to the Clifton 7 are found on the upper.

The Hoka One One Clifton 7 is designed with a new upper, which is made from a double layer of mesh material.

This open and more porous design makes it incredibly breathable and also allows the foot to move more freely due to its great flexibility, which was not possible to the same extent on the Clifton 6.

The shoe tongue has been attached by sewing a piece of mesh fabric to the upper of the shoe in order to prevent the shoe tongue from sliding from side to side whenever you run with the shoe.

Also, the shoe now has a higher heel cap for added protection and support around the heel and Achilles tendon, which I personally think works really well.

The shoe now fits much better at the back, and even though I am prone to getting blisters, this helps me to avoid this because the heel is padded and is protecting more of the heel.

However, I cannot decide whether the higher heel cap is beautiful or not. Some have called it an “elf heel”; however, the functionality of it is brilliant.

Besides the added support, the new heel makes it easier to put on the shoe. As a result, there is no longer a pull-tab at the heel, compared to the predecessor. 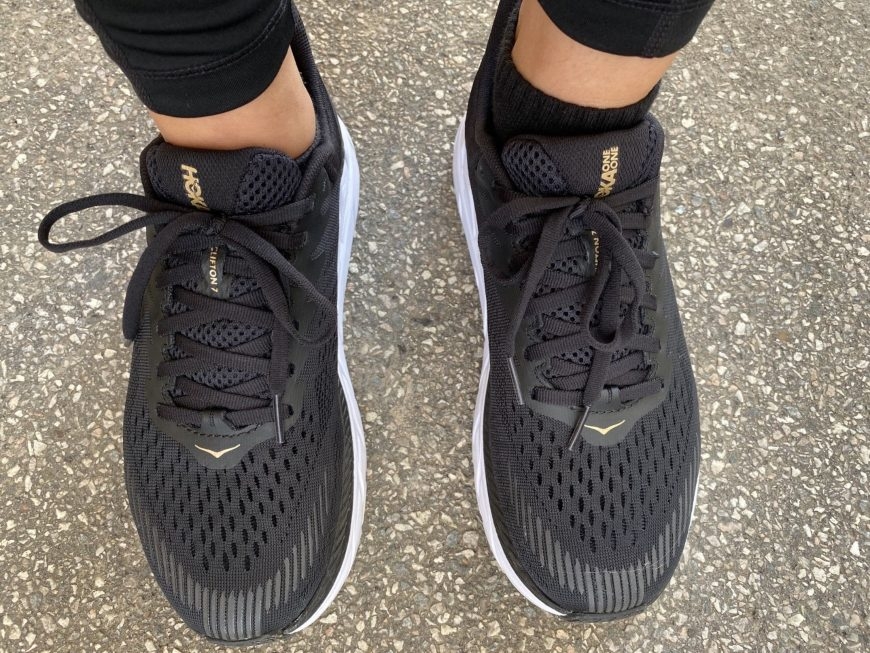 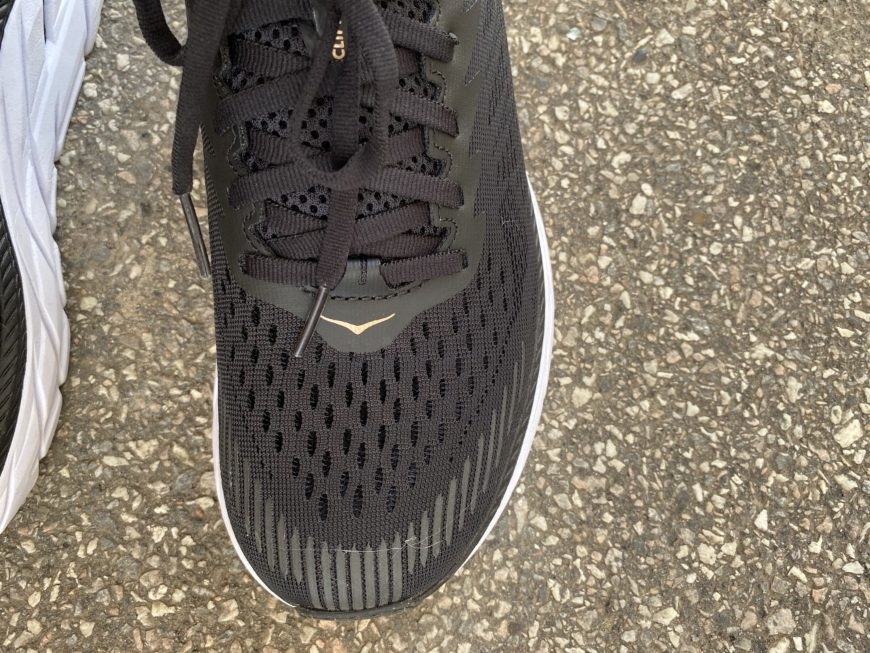 The midsole of the Hoka One One Clifton 7

The Clifton 7 has the same midsole as the predecessor, Clifton 6, which comprises a soft EVA foam in the full length of the shoe to provide superior shock absorption.

On top of this, just like the Clifton 6, the shoe is designed with Hoka’s Meta-Rocker technology, which is a combination of a low drop and a rounded sole. This complements your natural footstrike and helps to propel you forward.

At the same time, Hoka’s Active Foot Frame technology ensures the foot is placed in the midsole rather than on top of it. This gives incredible support when you are running, as the shoe will hug around your foot. 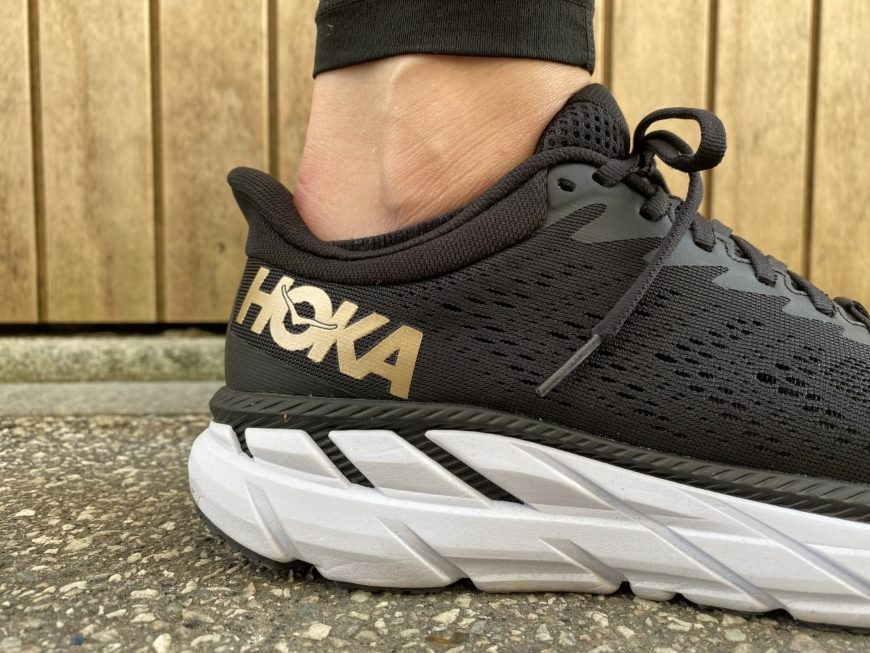 The outsole of the Hoka One One Clifton 7

The outsole of the shoe is made from a durable lightweight rubber that is strategically placed in areas of high abrasion. As a result, the Clifton 7 has great durability.

The rest of the outsole comprises the same foam material that has been used in the midsole.

By using less rubber on the outsole, Hoka reduces the weight considerably and consequently makes the Clifton even lighter. 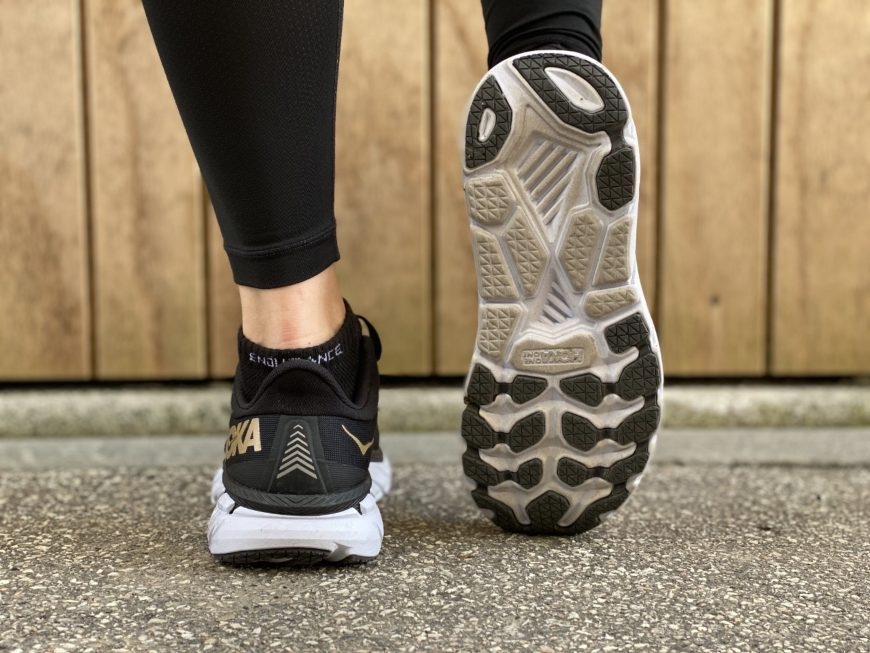 Clifton in a disguise of stability: Meet Hoka One One Clifton Edge

Do you love Hoka’s Clifton series, but at the same time want more stability than what the Clifton can offer?

Then you might want to consider Hoka’s latest release; the Clifton Edge. This is a shoe made for the runner who wants more stability but does not necessarily want to pick a stability shoe.

The Clifton Edge resembles the Clifton series quite a lot; however, the two shoes do differ.

Firstly, the Clifton Edge is designed with a much wider midsole, which protrudes from the heel and makes the Edge way more stable to run in. Almost like a mild stability shoe.

Hoka says that the special heel is intended to create a softer landing and a more flexible transition, which is indeed noticeable when you run.

In order to make the Edge lighter than the Clifton, the outsole of the shoe is made without rubber, which was otherwise intended to extend the durability on the Clifton model. 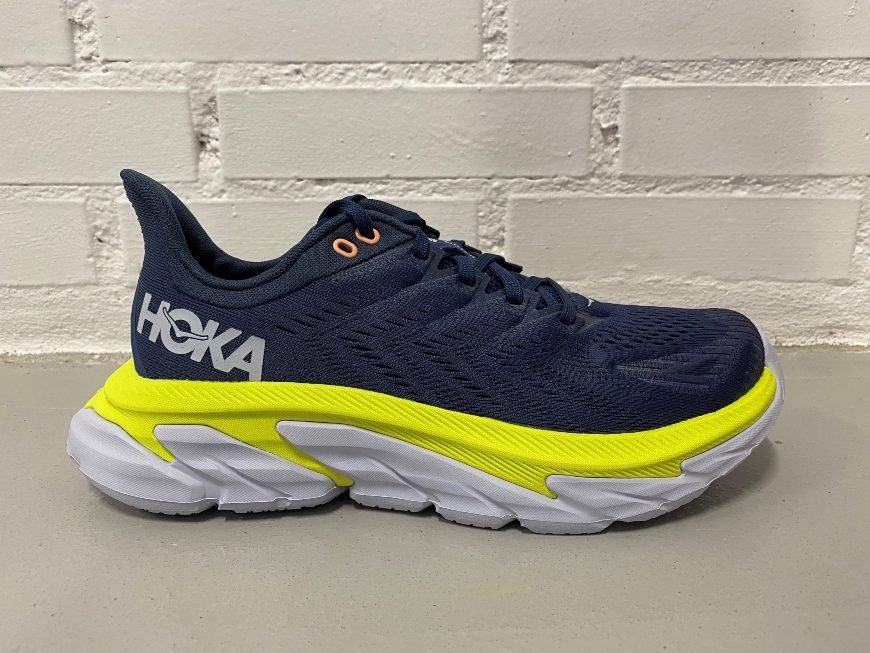 Compared to Clifton 7’s predecessor, the Clifton 6, nothing significant has changed. However, some minor changes have been made to the upper of the shoe, which successfully manage to make up for the things that were missing on the Clifton 6.

Personally, I think the upper on the Clifton 6 was a bit too padded, which reduced the breathability, made it extremely hot, and felt a bit stuffy to run with on the long distances.

However, this has certainly been rectified with the new version, which comes with a new and lighter upper to allow your feet to breathe.

Further, the shoe now has the shoe tongue fixed to the shoe and a higher heel cap to make it more comfortable and safer to run in. And it works really well, as these shoes manage to fit closely and feel stable on your feet.

Hoka has managed to ‘reuse’ the best features of the Clifton 6. They have improved it by introducing a few changes to the upper and keeping the exact same midsole and outsole.

Admittedly, it is not the biggest update Hoka is introducing with this new shoe, but why should you fix something if it is not broken? 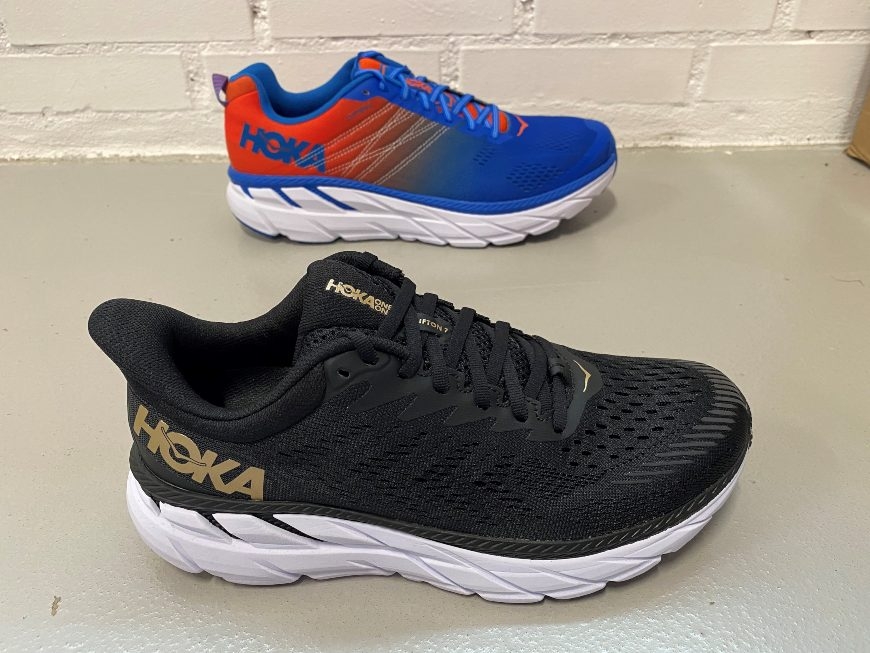 Clifton 7 is particularly great for the runner who needs an everyday trainer that can be used for almost anything.

The Clifton 7 is not a stability shoe, but it actually feels like it. This is mainly because of the great width at the centre of the foot, which gives it the same feeling of a stability shoe.

Whenever I am hitting the ground with these shoes, they feel both shock-absorbing and soft. But not too soft.

Exactly for this reason, the Clifton 7 is particularly great for various distances and paces. Even though it is soft and shock-absorbing, it is still firm enough to make you feel confident enough to pick up the pace whenever you wear them. 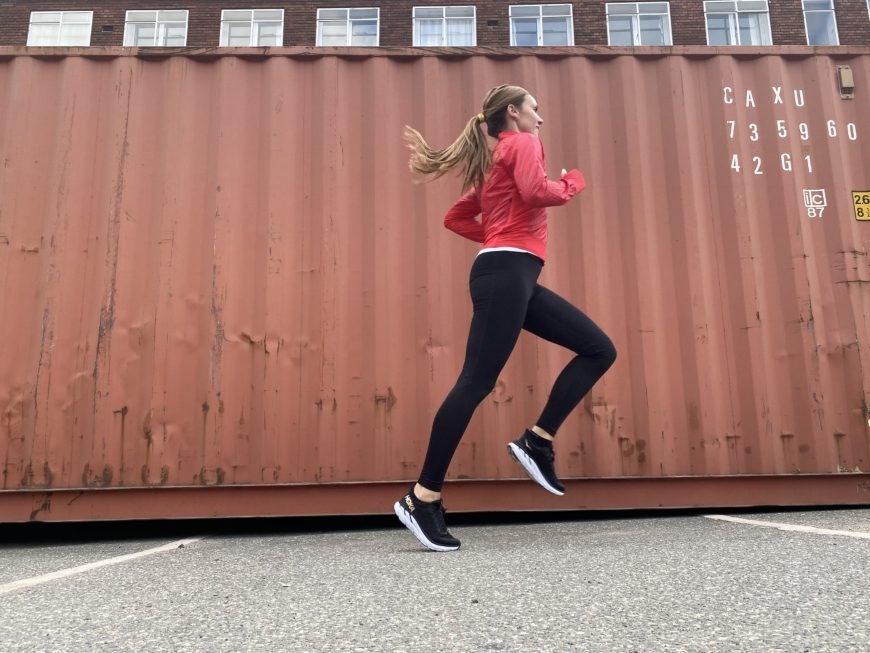 Hoka’s Clifton model has throughout its lifetime seen significant changes.

However, for the first time, Hoka has made a new version of the Clifton shoe that, to a great extent, resembles the predecessor. And this is a good thing.

As I have mentioned earlier, it was only the upper of the Clifton 6 that caused some trouble.

And Hoka has successfully managed to rectify this with the new model, which, consequently, makes it an incredible Clifton shoe.

If you have never tried the Hoka One One Clifton before, I can strongly recommend this shoe and, in particular, this version.

This is because the Clifton 7 manages to have all the best qualities from its predecessors and will deliver superior shock absorption and high comfort.

Find even more articles in our inspiration universe right here: