TEST: Mizuno Wave Rider 24 – The classic that keeps on delivering.

Mizuno has released the successor to the fantastic everyday trainer, the Wave Rider 24, which now has its own midsole material, Enerzy. Read more below and see what I think.

Mizuno Wave Rider 24!! – just arrived at my desk a little while ago. When you have a shoe that has been going for a while and is now running on 24th season, you know the manufacturer has done something right. I am inclined to call this a classic on the same level as the Asics Kayano. To be fair, I have not tried running in a pair of Mizuno before, I have only tried playing handball in a pair of Mizuno handball shoes and they are really good. So, I had my expectations set high for this one and luckily these expectations were met. 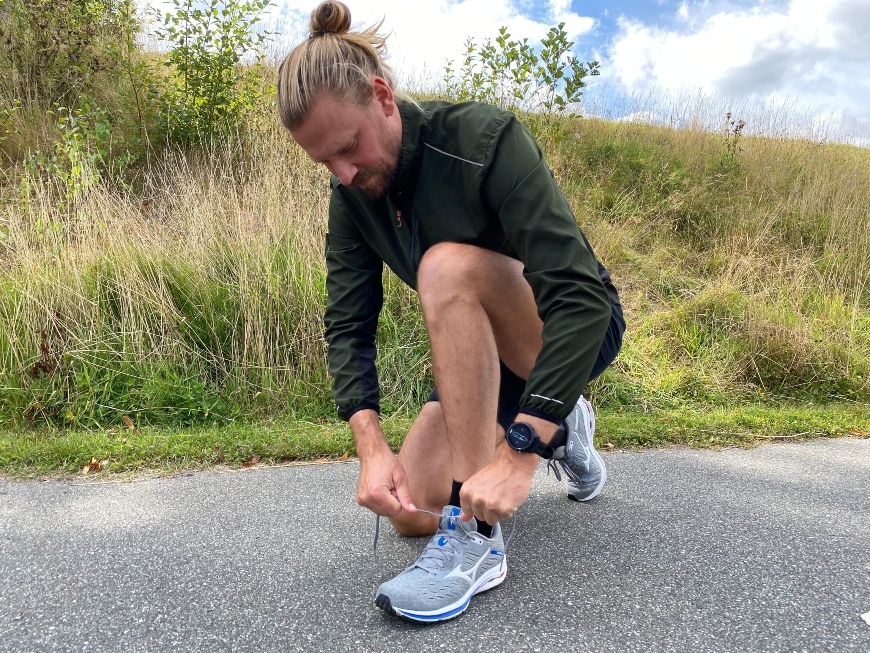 I enjoy dealing with a brand-new pair of shoes from a brand that I have not had any experiences with yet. There is a nice excitement and anticipation before going for the first run. I opted for the grey model (it is also available in blue), which has a ‘90s retro look that I quite like. In my opinion, it is a really cool-looking shoe. That is a big plus for me. Even though I have not tried running in a pair of Mizuno before, I have read a lot about Mizuno and its running shoes, so I have some background knowledge.

If you are interested in running, it may have been hard to ignore Mizuno’s development of its new material called ENERZY. I have been looking very much forward to trying this one. Apparently, it should be revolutionising and provide a lot more return of energy! As a runner, that is sweet music to my ears. 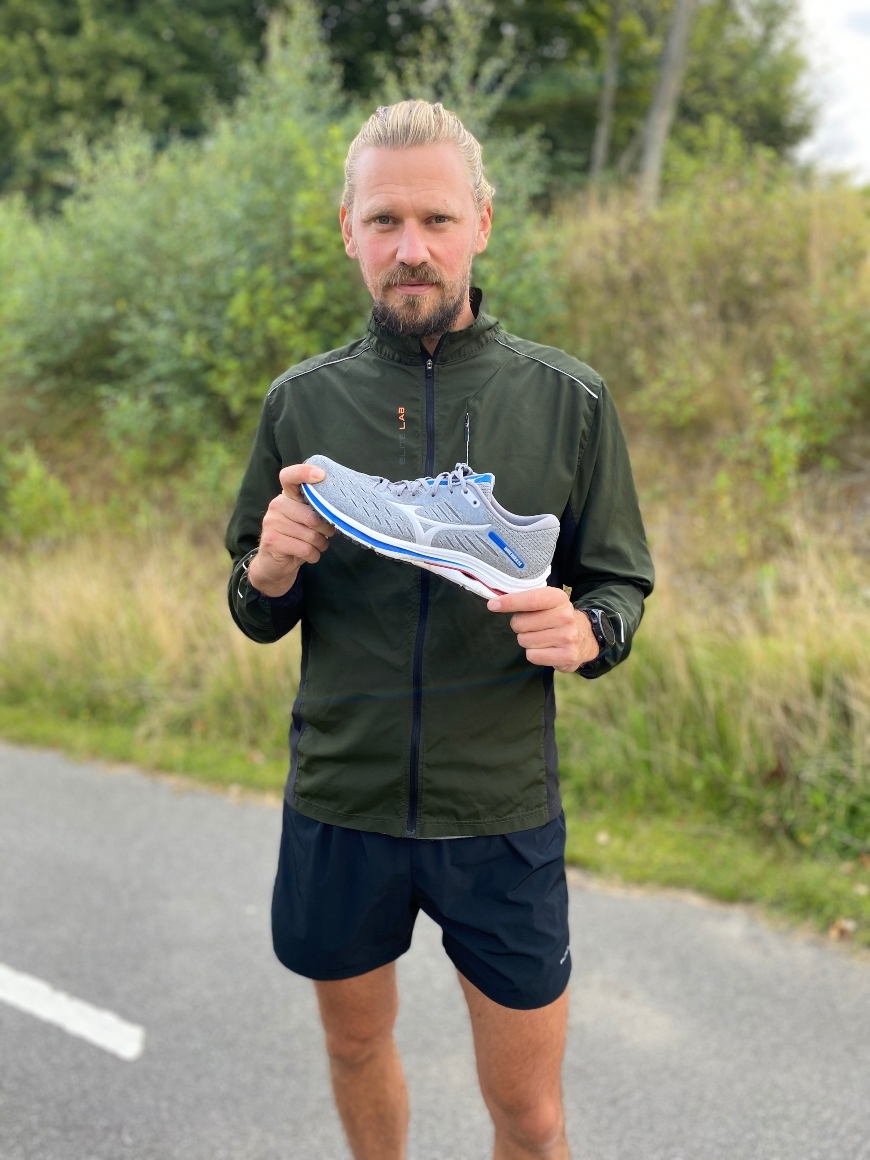 Mizuno Wave Rider 24 has a mesh upper that hugs around the foot. It is roomy and made in a one-piece upper that delivers a nice feeling and a clean look with the Mizuno logos on the side. The shoe tongue is fixed to the sole with two elasticated bands that ensure the shoe tongue stays in place whenever you are running. 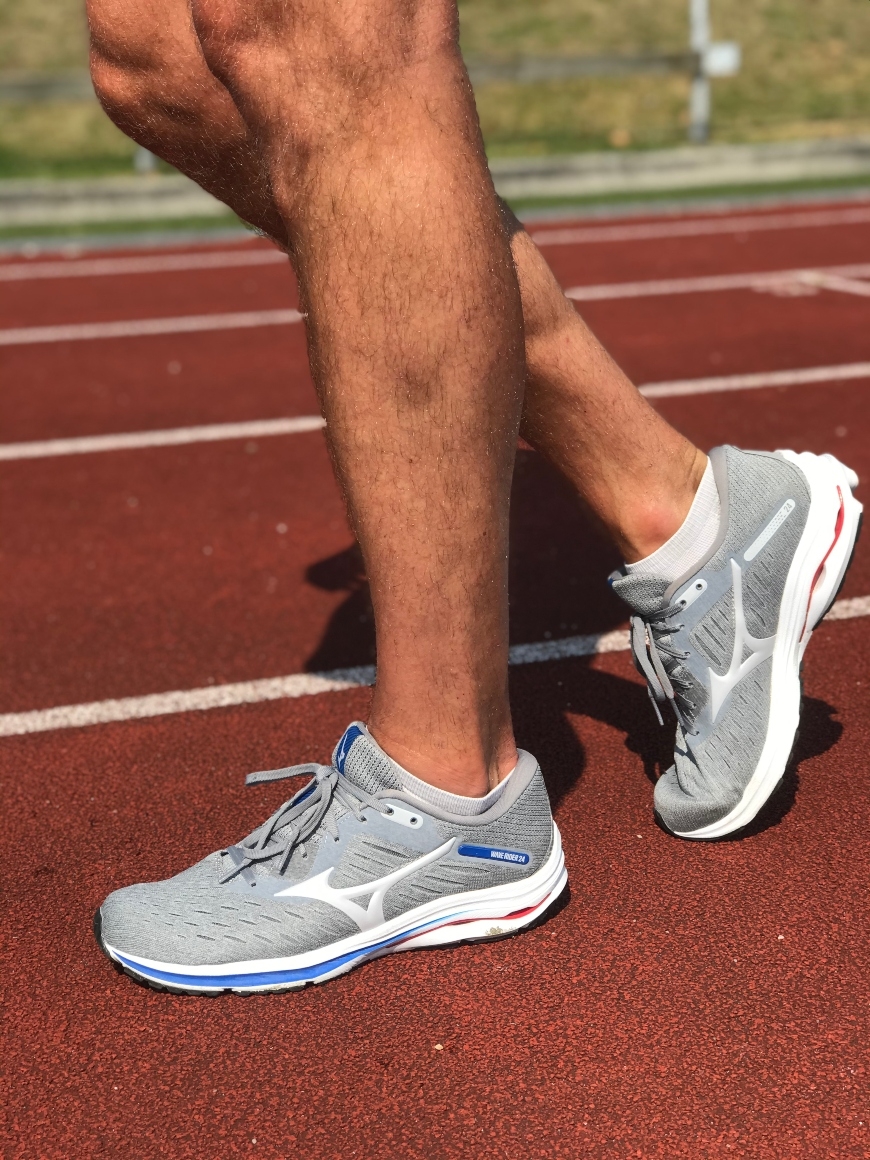 Mizuno has continued with its Wave Plate technology. That is the red plate you can see in the heel of the Mizuno Wave Rider 24. This technology allows for a smoother landing by distributing the pressure across the entire heel. At the same time, however, it also ensures that you do not sink too far into the soft Enerzy foam, which helps to deliver an even greater return of energy. 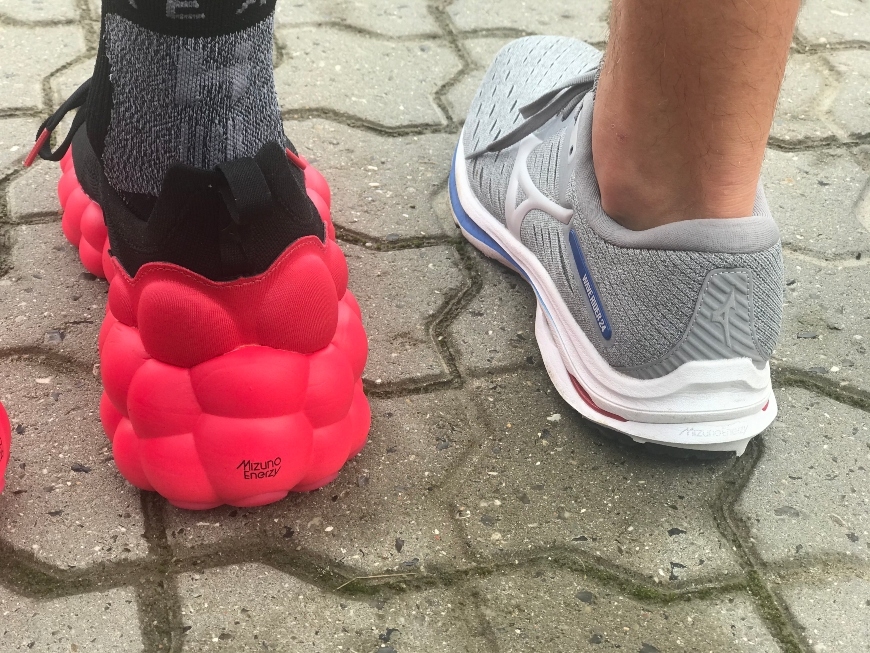 Mizuno has been so excited about the new launch that they have created a concept shoe made of only Enerzy foam. It has a very different look. What do you think? See the picture below.

The shoe will, unfortunately, not be for sale but it is incredibly soft and springy!

For the Mizuno Wave Rider 24, Mizuno has placed the ENERZY foam in the lower part of the sole around the heel and at the very front of the sole, as these are the areas where most runners will land. For the Mizuno Wave Sky, however, they have decided to place it in the entire midsole. For the rest of the midsole, there is the same firm material that can be found in earlier Mizuno models. This has been done to provide a soft heel landing with a firm and quick toe-off from the forefoot. 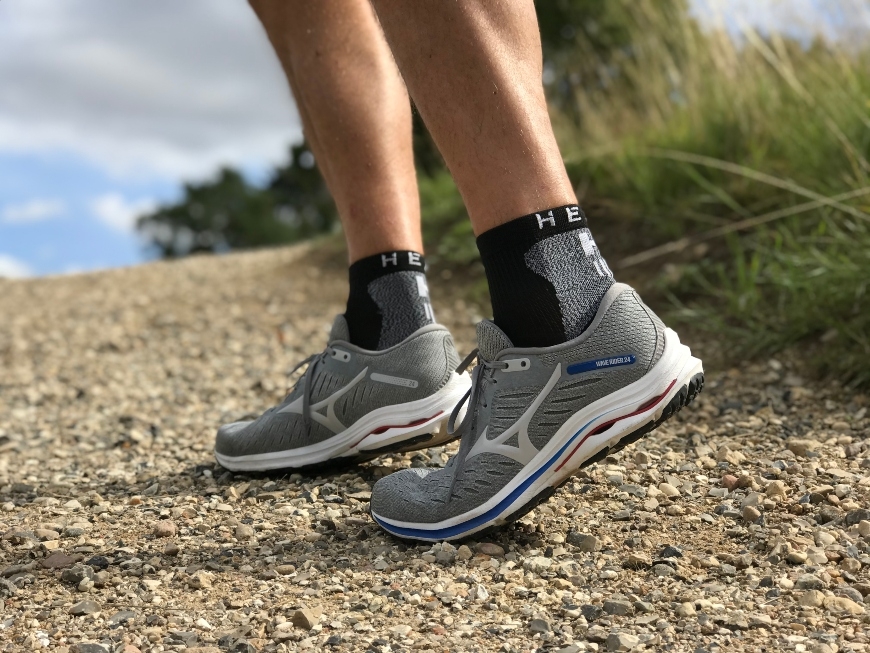 The outsole is a pure rubber sole with plenty of rubber for many, many miles. It has a really great grip, so you will be solidly planted in the asphalted road and gravel pathways – even when you are twisting and turning. 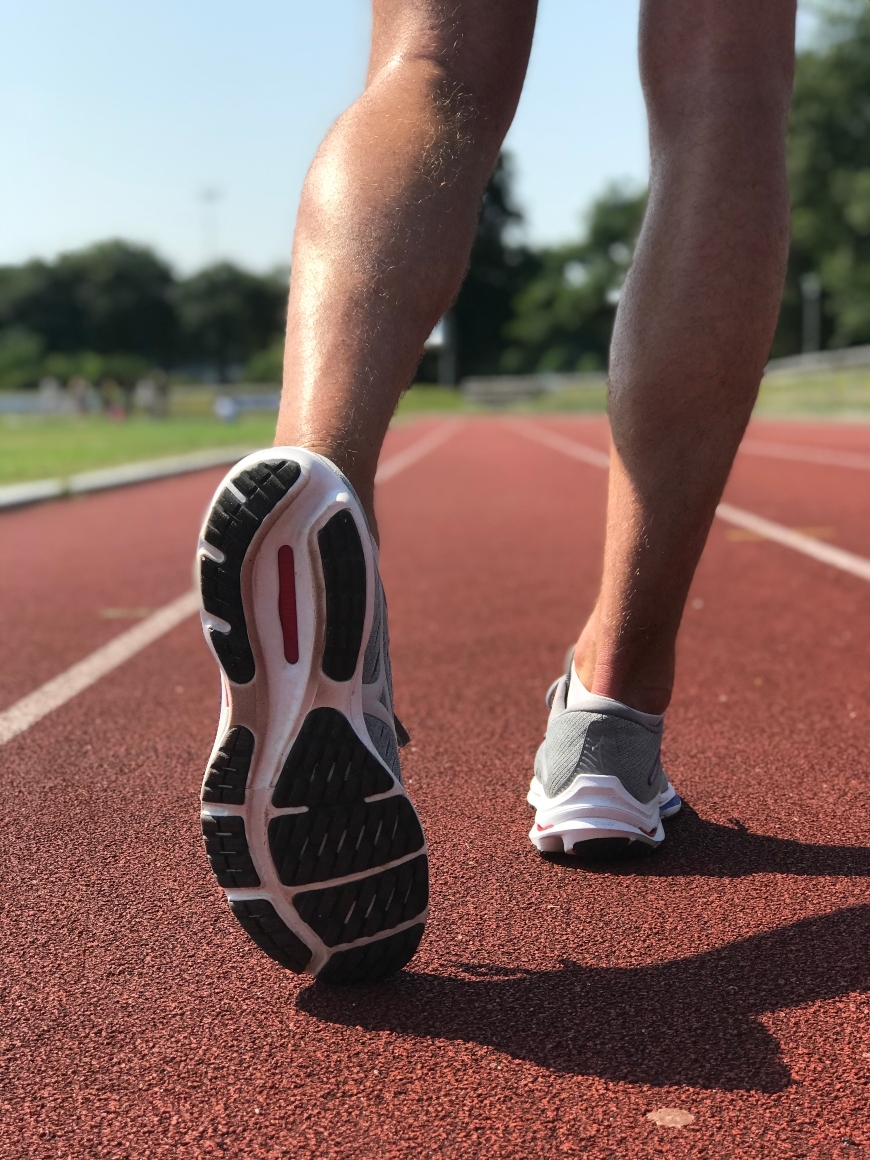 HOW DOES IT FEEL TO RUN IN?

After my first run in the Wave Rider 24, I was a bit sceptical, as it felt very different to what I normally run in like the Nike Pegasus Turbo, HOKA ONE ONE Clifton Edge and New Balance Fuelcell TC. These models all have very soft materials, which, in comparison, makes the Wave Rider 24 feel a bit firmer (despite the addition of the new Enerzy foam). However, on the second run, it felt completely different and you start to feel why this model has been going for so many seasons.

It is nice to wear and delivers a great toe-off, and then it just feels like a shoe that can keep going without getting tired or worn out. I have been wearing them for anything from interval training to long, calm runs and there is no doubt in my mind that they truly shine on the long runs, even though they have also surprised me positively on the longer interval training of 1k or more.

Mizuno Wave Rider 24 has a drop of 12mm and a weight of 272 grams (US 9), so on paper, it is not built for the short and fast runs. However, the interplay between the Enerzy material and the Waveplate technology works brilliantly and actually makes it for a decent shoe for the short runs too. It is a shoe for the runner that wants more than one pair of shoes, as the shoe is so versatile on all distances and in every tempo.

The conclusion is that the Mizuno Wave Rider 24 is a clear winner for you that need the right running mate to follow you on ALL of your weekly runs.

PS: There are 60 days of satisfaction guarantee on all Mizuno shoes!! Read more here. 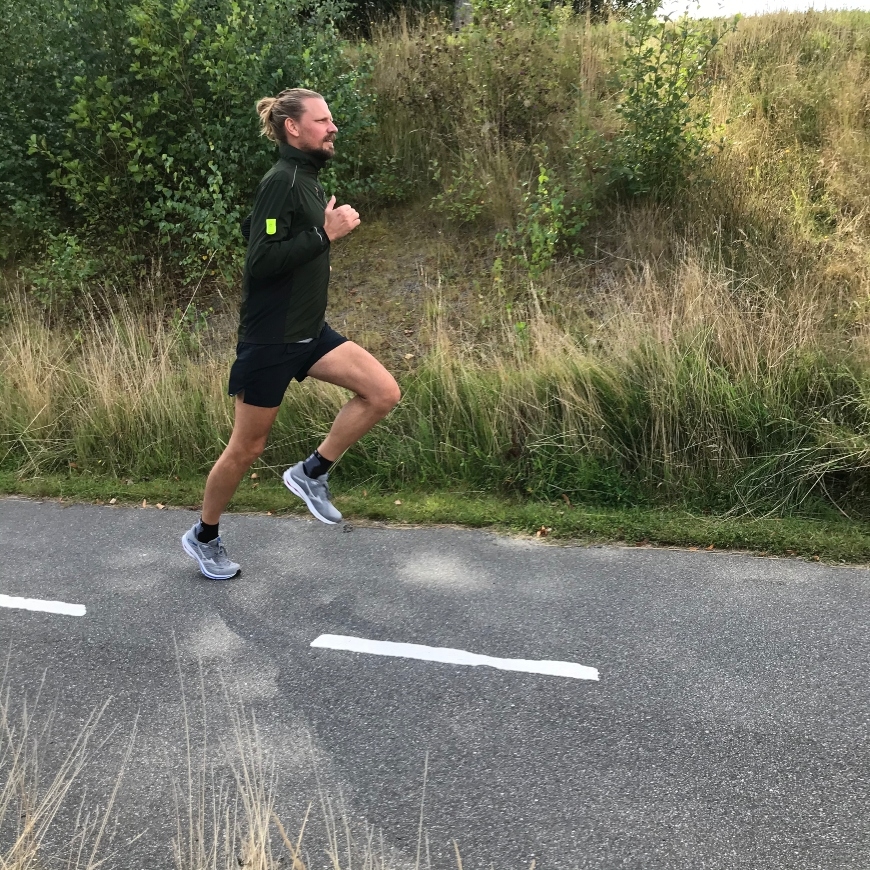