Nike has just launched its brand-new running shoe – React Miler. This shoe – like the Nike Pegasus 37 and Nike Infinity Run – is a part of the React Foam-series.

A really exciting running shoe designed to provide the softest, most stable, and shock-absorbing run on your longer routes.

Read the whole review of the Nike React Miler below and learn more about what this shoe can, and why this shoe is worth considering when you are running long-distance, or simply need a good and versatile shoe for your daily runs.

About the Nike React Miler

The React Miler is a brand-new model from Nike, and it elegantly takes the role somewhere between a neutral running shoe and stability running shoe. This shoe offers both a stylish design, and just the right amount of support to make it suitable for both neutral runners, and runners who need more stability in their running shoes.

This is partly because of the increased sidewalls and the wide outsole, which is unlike most of Nike’s other models that tend to be quite narrow.

The midsole of the React Miler is entirely made up of React-foam, has a 10 mm drop, and is also the heaviest model in the React Foam series with its 300 grams (size 40).

The bigger weight, however, is not something you will notice once you start running in them.

The name React Miler also suggests that this shoe is made for longer runs because of the shoe’s long-lasting and durable React-foam, which provides great shock absorption.

In order to make the shoe more durable and long-lasting, the shoe has some strong leather at the toe box.

The heel of the shoe is made from the experience and insight of hundreds of runners, which, as a result, means the heel hugs itself securely around your foot, when you are running. 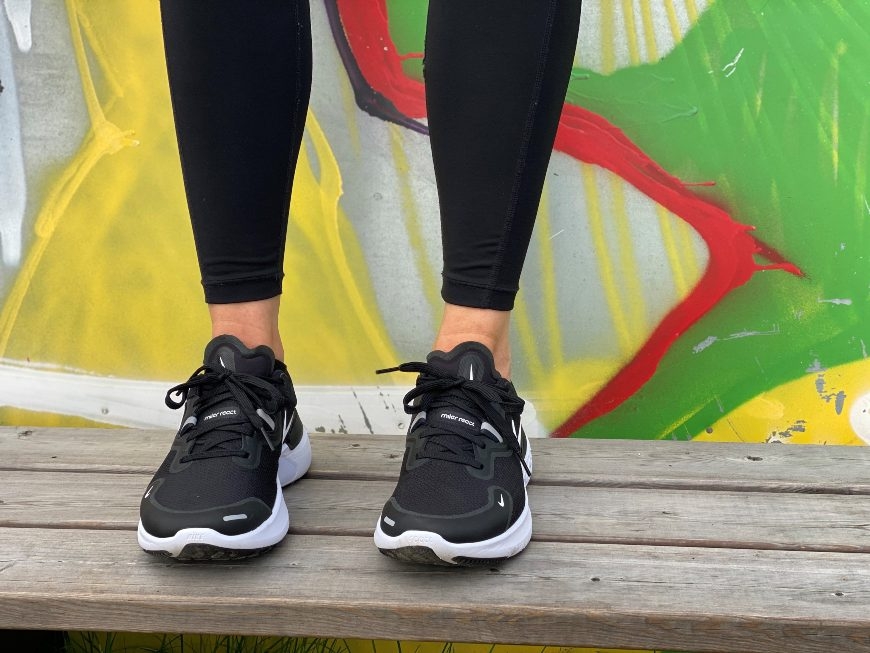 The upper on the Nike React Miler

The upper of the shoe is made from a relatively simple and thick material and is a little bit stronger than most of Nike’s other new models.

Personally, I would say this is the only negative thing about the shoe, as the thicker material makes it slightly less breathable.

However, the stronger material, in combination with the strengthened lacing panels, helps to keep the foot in place on the midsole. It provides for a more stable and secure feeling to run in. This is great and will definitely negate the one negative thing about the shoe. 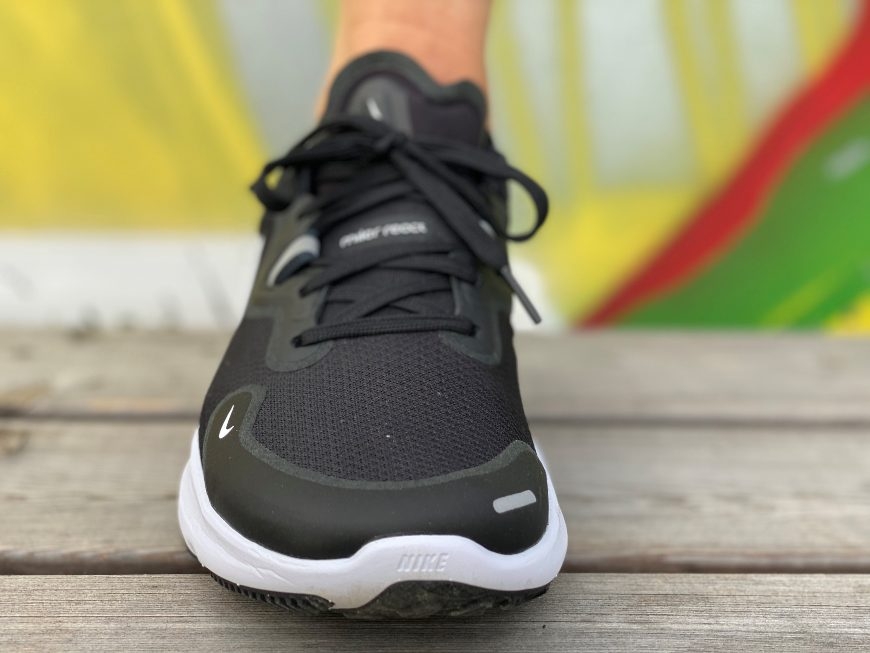 The Nike React Miler is made with Nike’s revolutionising React foam, which is incredibly soft and responsive foam.

The Nike React foam is an astonishing 11% softer and provides 13% more return of energy compared to the previous generations’ softest and most springy models.

The midsole is therefore incredibly soft and offers a light and springy feeling.

One of the best features of Nike React Miler is the fit of the shoe. The snug fit keeps your foot in place in an entirely new and improved way.

The shoe’s heel cap is made from a harder and more stable material, which keeps your heels in place and prevents them from ‘sliding out’, which you are probably all too familiar with in other shoes – I certainly am.

Also, the instep is made in a narrow and almost sock-like design and provides a really good, snug fit around the ankle for maximum support and comfort. 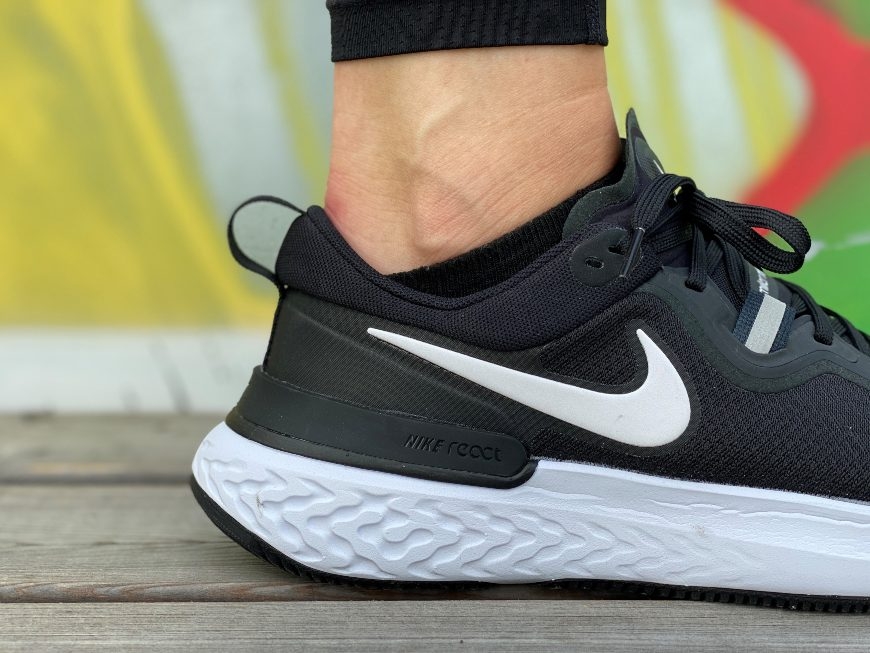 As you have probably already noticed from the picture below, the React Miler is designed with a slightly wider forefoot and heel compared to many of Nike’s other models. And there is a good reason for this.

The wider design helps for increased stability and at the same time gives more room for your toes, which is great if you are prone to swollen feet on your run.

Therefore, if you are wide footed like me and previously have had problems with the sometimes narrow Nike shoes, then you will definitely love the fit of the Nike React Miler.

Also, the areas on a shoe that typically experience the most wear and tear have been designed with details of durable rubber to increase the longevity of the shoe and offer a good grip with the surface. 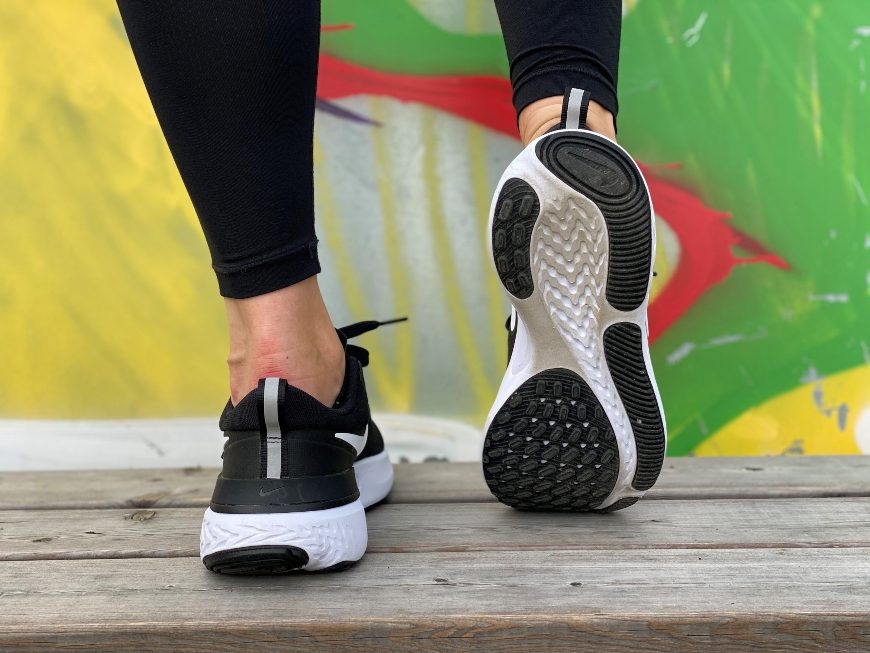 At this point, you will probably ask what the difference is on Nike’s three newest base training shoes; the React Miler, React Infinity Run, and Pegasus 37 (which are all a part of the React foam series).

Here is your answer:

Compared to Nike’s long-distance shoe the Infinity Run, the React Miler is a more versatile and stable running shoe.

This security and stability are because of how the design of the Miler securely locks your foot in an entirely different way than the Infinity Run.

One of the reasons for this is because of the strengthened heel cap and the slightly thicker upper, whereas the Infinity Run’s upper is made from the thinner (and more breathable) Flyknit material.

On the topic of stability and the feeling of having your foot locked in the shoe, my colleague Jesper requested exactly this in his review of the Nike React Infinity Run Flyknit. You will definitely get this with the Nike React Miler.

Compared to Nike’s do-it-all shoe, the Pegasus 37, then the biggest difference is how the Miler is made with a slightly less dense React foam, which makes it softer than the Pegasus.

Therefore, the Miler is most suitable for the long and slow runs compared to the Pegasus, which is better for the short runs at a higher pace.

Additionally, the Pegasus is made with a different heel cap to prevent irritations of the Achilles’ heel. As a result, the grip at the heel is a bit looser, which, in comparison, makes the React Miler significantly more stable. 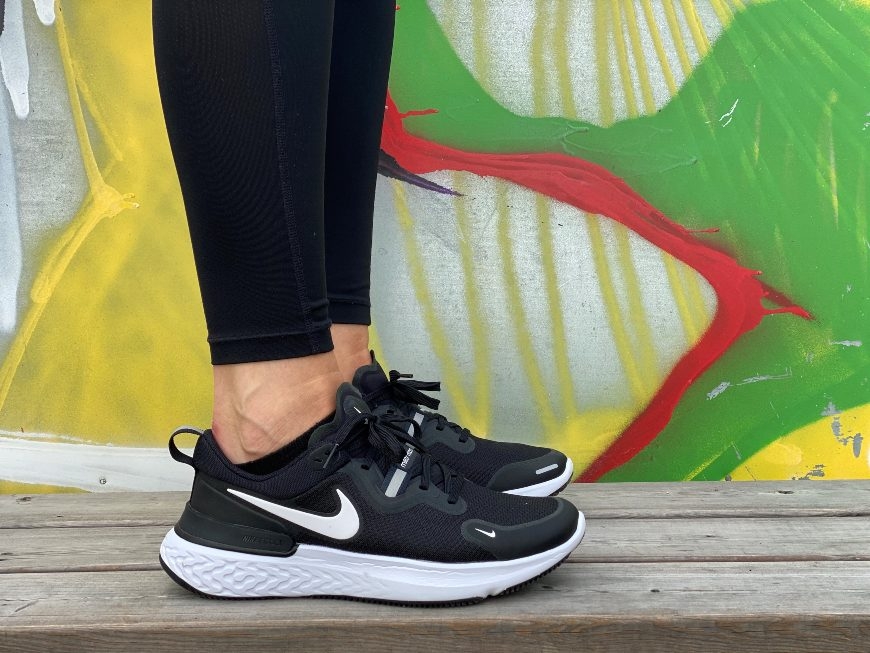 Note to self: Never judge a book by its cover

To be honest, I was not particularly excited when I first opened the shoebox and saw the React Miler.

Because, as you may already know by reading my other reviews, I prioritise the visual expression and design dearly, whenever I pick my next running shoes. In this area, the React Miler is a bit neutral compared to some of Nike’s other new models.

But I must say, I have been blown away and I am pleasantly surprised about this model after testing it for a couple of weeks now. The Nike React Miler is really a shoe you need to try on.

You definitely need to try it on because of its stable features, which makes it perfect for longer runs, and because of the fantastic bounce, shock absorption, and the return of energy it delivers. 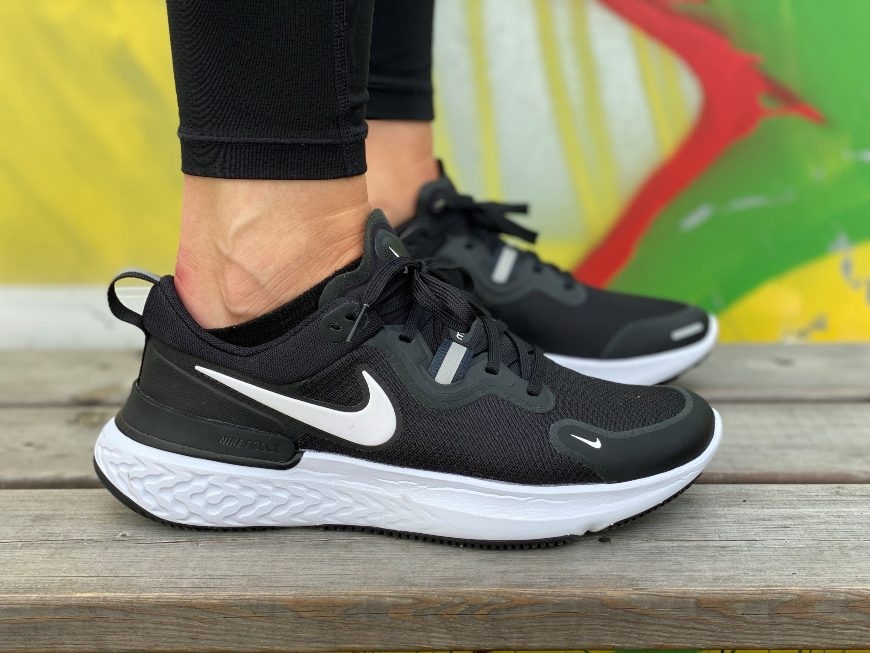 Nike React Miler is made for a lot of kilometres

The Nike React Miler is the perfect long-distance running shoe for the one who wants extra stability without feeling that the foot is being forcibly fixed.

This shoe will probably not be your first choice on race day; however, it is fantastic for your daily runs and the longer and more challenging distances. This is because this shoe is made for a lot of kilometres thanks to its stable and durable design.

Overall, Nike’s new React Miler is a great running shoe for the runner who wants a comfortable, springy, and not least, stable base training shoe for both the short and long distances.

I, myself, have really started enjoying them at my daily training – so much that it has made it difficult for me to pick other shoes to run in.